A month after Kim Dotcom was released from prison on bail, his wife Mona has given birth to healthy twin girls. The twins were born in the National Women’s Hospital in Auckland weighing 2.4kg and 2.8kg.

The Megaupload founder was delighted to report the news and the now five-time father proudly posed with the new Dotcoms.

“When they asked me if I would like to keep the placenta (weird question) I said yes, and please send it to the FBI for forensic analysis so they can verify there is no pirate DNA ;-),” he added.

Kim Dotcom and his twin daughters 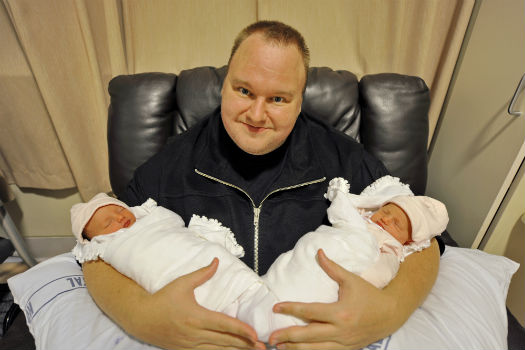 No names have been mentioned for the latest additions to the Dotcom household, but it’s a safe bet those on the shortlist begin with ‘K’.

Dotcom is currently preparing his defense against the indictment of the US Government, which he says will be “enlightening and maybe entertaining.” More news on this will arrive during the coming week.