Kim Dotcom: Mega Will Turn Encryption into a Mass Product

January this year the U.S. Government destroyed Megaupload, but founder Kim Dotcom is a not done with the file-hosting business yet.

On the contrary, he is preparing a comeback with something bigger and better.

Over the past several months a group of coders have been working hard on the new “Mega” which is scheduled to launch January 20 2013, exactly one year after Megaupload was shut down.

Today, Dotcom revealed the look of the new Mega, showing off the new encryption feature, the registration screen and a new file manager.

Speaking with TorrentFreak, Dotcom says the new site is the result of many years’ expertise in the file-storage business.

“It’s special because seven years of experience have been turned into the perfect cloud storage solution. It scales infinitely. It provides up- and download acceleration and resume in the browser thanks to the latest HTML5 technology,” he says.

The encryption part pictured below is perhaps the most exciting feature unveiled thus far. Before users upload their files to Mega they will be encrypted using the AES algorithm. Advanced security, but based on code that will be open source.

“File transfers and storage are encrypted with military strength and you don’t have to take our word for it, that part of the code is open,” Dotcom told TorrentFreak. 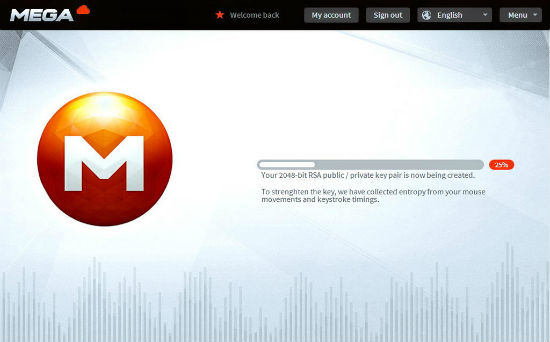 Encryption is the future according to Dotcom, who believes that with help from Mega encryption will be the file-sharing standard in five years, accounting for half of all Internet traffic.

“Our easy to use one-click privacy feature will turn encryption into a mass product. We believe within five years half of all Internet traffic will be encrypted with solutions born from our new API,” Dotcom says.

“I believe in our rights to privacy and legal sharing. I intend to protect those rights when governments are acting in the interest of corporations rather than society and progress,” he adds.

Despite their ongoing legal battle with the U.S. Government, Dotcom and his team are determined to bring new innovations to life.

“Mega brings liberation by innovation and I hope everyone will spread the word when Mega comes to life in January,” Dotcom concludes.

In addition to the encryption screenshot, earlier today Dotcom also teased the file manager interface and the registration screen on Twitter. 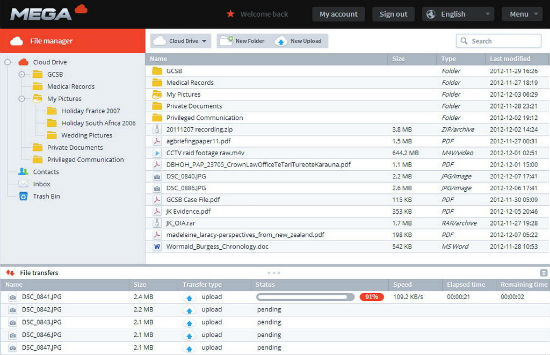