During the last decade and a half the leaking of music online has become a very common phenomenon. These days it’s quite exceptional for a new album to become available via official sources before it’s available illegally and file-sharing sites and networks are awash with content at the click of a button.

A couple of years ago leaks became so common that in all but the most unusual of cases, pre-releases ceased to become ‘news’. However, this past weekend an angry reaction by one of the world’s biggest pop stars provoked a somewhat interesting response from her fans.

In November Lady Gaga will release her new album. Titled ‘ARTPOP’, it features a new single called ‘Applause’, several snippets of which were leaked onto the Internet this weekend. Perhaps needless to say, Lady Gaga wasn’t impressed.

So while just another leak is somewhat unexciting, the response by Gaga’s fans to her apparent upset changes things a little.

Rather than sharing links to the leaks far and wide as might be expected, many of Gaga’s Little Monsters have become little angels with the launch of their very own crowd-sourced anti-piracy campaign. 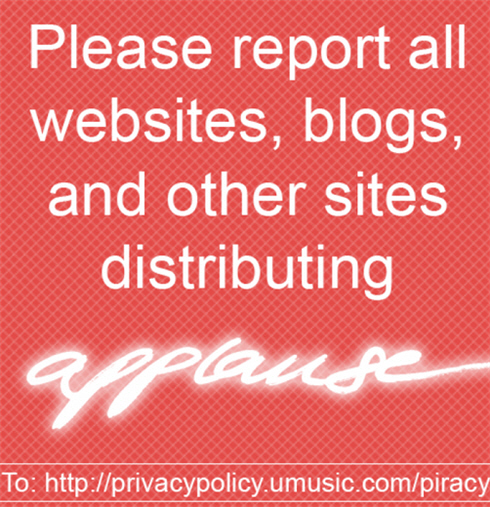 It isn’t clear Who started the movement, but there are now thousands of fans condemning the leak on Twitter and various blogs and fan forums, many providing a link to Universal Music’s portal where people can report sites hosting the leaked track. Add to this a retweet of the campaign by Lady Gaga herself and things really gained traction.

The response by Gaga’s fans is fairly unusual, with one claiming to have reported upwards of 500 links to Universal, with others focusing on celebrity scalps. “Just reported a Soundcloud link and Perez Hilton’s blog to UMG,” one Gaga fan wrote on Twitter.

But despite the enthusiasm, one has to question the whole episode on a number of levels.

First, we aren’t talking about a whole album leak here, or even the leak of a full single. This is the leak of a few seconds of what appears to be three different parts of the track ‘Applause’, so why is Gaga so annoyed and why are her fans so outraged to the point of helping her to get the content taken down?

These samples represent the perfect taster – just enough to get people excited but not too much so that people don’t want to buy the real thing. From a business perspective, leaving them up makes more sense than taking them down.

Second, one has to wonder how many of the Little Monsters had the self control not to click any of the links they found, if only to test what they were reporting was the real deal. One can imagine a solitary fan, hunting down these links, thinking “just one little listen by me won’t hurt.” And they’d be absolutely right.

Let’s face it – most of Lady Gaga’s fans listened to the links they found. Of course they did. And when Gaga retweeted the ‘report piracy’ link to her 39.7 million followers, did she think for an instant they would deny themselves a sneak listen to a few measly seconds of their idol’s latest work? She may as well have cut out the middle man and pasted the link there herself.

So has any harm been done? No – absolutely none whatsoever. Will Universal spend a fortune getting these links taken down? Doubtful. Straight to number one when the track’s released in a few days? Guaranteed.