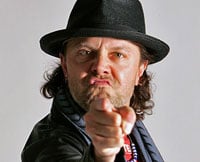 In recent times it’s become something of a trend in the music industry to admit that its handling of Napster left a lot to be desired. Of course, everyone was telling them this exact same thing 10 years ago.

While some, such as the BPI’s Geoff Taylor, have shown at least some sign of regret (although not necessarily backed up by actions), others are adamant that crushing the file-sharing pioneer was the right thing to do.

Despite making some uncharacteristically pragmatic comments about P2P last year when his album ‘Death Magnetic’ appeared on the Internet, and despite trying file-sharing himself fairly recently when he downloaded the album using BitTorrent, Metallica drummer Lars Ulrich has no regrets over his part in the neutering of Napster.

Ulrich and Metallica generated years of hate with their aggressive anti-Napster stance in the early part of the century, after discovering their entire back catalogue was available through the service.

But now, speaking with Kerrang!, Ulrich says he did the right thing in bringing Napster down, standing firmly behind his decision, expressing pride where others today are expressing cautious regret.

“Being right about Napster doesn’t mean that much to me. I don’t find any particular glory in being proved right about it,” he said.

Turning to Napster’s management, Ulrich said he admired them for managing to paint the band as greedy rock stars who were behind the times, although it hardly seems fair to give Fanning and friends all the credit for that – the band did more than enough to nurture that impression too.

“You have to give props to the other side because they did run a brilliant campaign, and they did portray me and Metallica as being greedy rock pigs and luddites who were completely behind what was happening technologically,” said Ulrich.

“But I am proud of what we did, and what we stood up for,” he added.

Indeed, today’s file-sharing community owes a debt of gratitude to Ulrich and Metallica, because without their efforts to destroy Napster there wouldn’t have been the massive effort by others to create the many improved replacements available today.