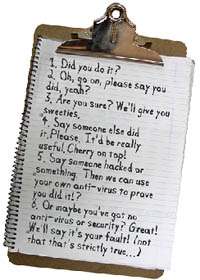 After sending out thousands of letters to UK Internet users who have allegedly infringed their clients’ rights, lawyers ACS:Law have a couple of cracks appearing in their armor.

Davenport Lyons (DL), the law firm which pioneered the “pay-up-or-else” scheme in the UK, are facing disciplinary proceedings by the Solicitors Regulation Authority on allegations of misconduct. Knowing full well that they cannot make the same mistakes as DL, ACS:Law are trying to be a little more careful in the way they try to force money out of letter recipients.

According to ACS:Law owner Andrew Crossley, his company does not state that the people they send their letters to are guilty of anything, only that their connection has been used to infringe. He also goes on to say that his letters are merely an offer to settle any potential legal case in the future and people aren’t obliged to pay anything.

This is great news. Since Crossley admits he can’t prove the letter recipient has committed any infringement, that same recipient is under no obligation to pay a dime. So it’s all finished there then? Not a chance, ACS:Law don’t give up so easily.

Yesterday consumer magazine Which? reported on the questionnaires being sent out by ACS:Law. The law firm sends these out once people have written to them denying they did anything wrong. All they are designed to do is to enable the letter recipient to incriminate themselves or, in some cases, other people.

The advice from Deborah Prince, Which?’s head of legal affairs, is that people are under no obligation to fill in these questionnaires. These bits of paper simply amount to a fishing trip by a law firm clutching at straws in the face of a recipient who won’t be bullied and won’t pay up.

But these questionnaires aren’t new – ACS:Law have been sending these out for some time. Just after we published consumer group Being Threatened’s guide to dealing with letters from the lawyers back in January, they added a bonus section.

The Speculative Invoicing Handbook Bonus Chapter: Not replying to a questionnaire is available for download here and really shows these questionnaires for what they are.

“If you’ve ‘replied and denied’ and now received a letter from a law firm requesting further information: Congratulations! This kind of mailing demonstrates that at present they don’t have enough information to build a case against you,” explains the guide.

“Your straight denial has left them out in the cold. Now they’re hoping you’ll be kind enough to fabricate a case against yourself (or maybe someone else) on their behalf. Perhaps you’ll be good enough to suggest your own grandmother who surfs eBay for wool supplies when she pops over on Sundays? Maybe your younger brother, or your flatmate? Thankfully you’re not as stupid as they’d believe.”

Yet despite the wealth of information available to anyone with a web browser and a rudimentary grasp of Google, people continue to give ACS:Law money. In the first 11 months of their scheme they collected an amazing £1,000,000 from these letters. How many cases went to court? Zero.

One day people will see this cash cow for what it is and stop feeding it. Hopefully that will be before we see our first flying pig.

Copies of the questionnaire can be found here.