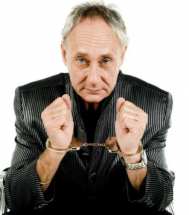 Speculative invoicing – the practice of claiming people pirated files on BitTorrent, listing hundreds or thousands of people in one case to get details, then harassing them outside the courts for payment – was thought to be dead in the UK, after ACS:law collapsed last year.

The solicitor at the center of that lawfirm, Andrew Crossley, was both fined and suspended from practicing law, which seemed to put a hold on similar cases.

However, it didn’t dissuade everyone. Yesterday, the UK’s High Court approved a case involving UK pornographer Ben Dover (real name Lyndsay Honey) and his company Golden Eye International. Now, ISP O2 will have to release the details of up to 9000+ subscribers listed in the document for Dover and Golden Eye. The precise number is unclear, as other companies that attempted to send letters through Golden Eye were denied the opportunity.

It’s success at last for the pornographer, as he’s had several similar cases thrown out in the past including a partnership with 170-year-old law firm Tilly Baily Irvine which ended in sanctions last year.

This claim process started 6 months ago, and with O2 stating they would not contest the case. Chief Master Weingarten, in response,  suggested that Consumer Focus (a government funded body looking after consumer rights) represent the IP addresses – the intended defendants – in court instead, a role Consumer Focus accepted.

Despite a strong defense, including pointing out all the issues with these kinds of actions, Weingarten approved the order, but with conditions. In perhaps a first for this sort of litigation, the court will be supervising the content of letters sent out to the alleged infringers, partly because of the ACS:law debacle.

Yet the most important part of the ruling is near the end, and might stop this practice once and for all; blanket fees to “make it all go away” are not acceptable.

137.   Fifthly, I think that Mr Becker’s response in his second witness statement to the point made by counsel for Consumer Focus referred to in sub-paragraph 60(v) above is telling:

This comes quite close to an admission that the figure of £700 has been selected so as to maximise the revenue obtained from the letters of claim, rather than as a realistic estimate of the damages recoverable by the relevant Claimant from each Intended Defendant. In any event, that is the inference I draw in the light of the matters discussed above and in the absence of any disclosure of the information referred to in paragraph 88 above.

138.   Accordingly, I do not consider that the Claimants are justified in sending letters of claim to every Intended Defendant demanding the payment of £700. What the Claimants ought to do is to proceed in the conventional manner, that is to say, to require the Intended Defendants who do not dispute liability to disclose such information as they are able to provide as to the extent to which they have engaged in P2P filesharing of the relevant Claimants’ copyright works. In my view it would be acceptable for the Claimants to indicate that they are prepared to accept a lump sum in settlement of their claims, including the request for disclosure, but not to specify a figure in the initial letter. The settlement sum should be individually negotiated with each Intended Defendant.

No more fee demands. Instead they can only state that they will accept a lump sum payment as settlement, to be negotiated if the accused accept liability. Otherwise, it will be down to the courts. It also seems that after many cases, Chief Master Weingarten has understood that these cases are about profits, not protecting rights. Very little money and a lot of grief was the prediction we highlighted earlier this month, and that seems to be the case.