The U.S. Copyright Group (USCG) has been all over the news in recent months. The lawyer group sued thousands of BitTorrent users who allegedly file-shared motion pictures belonging to their clients, including the Oscar-winning Hurt Locker and more obscure titles such as Far Cry and Call of the Wild.

On behalf of the copyright holders, USCG has already sent settlement offers to many affected BitTorrent users. To settle the case the alleged copyright infringers have to pay up to $2,500 or face the risk of higher penalties in a full-blown court case.

The problem with this scheme is that defendants have few viable options to defend their rights. Hiring an attorney often costs more than the settlement amount, and ignoring the settlement offer might lead to an even worse outcome.

Two months ago the EFF published a list of attorneys that could help advise and possibly represent subpoena targets. Although this is a great pointer for individuals who don’t know where to get decent legal representation, all the listed attorneys still ask hundreds of dollars or more for their services.

Attorney Graham Syfert of the Affinity Law Firm is one of the lawyers listed by the EFF, and like the others he has been contacted numerous times by those targeted by USCG. Although Syfert is willing to help them all, for many the costs of hiring an attorney are simply too high.

“One of the major problems that people encounter when trying to hire me on these cases, is that a settlement is approximately what an attorney would need to even begin a defense,” Syfert told TorrentFreak.

To address this issue, Syfert decided to prepare several documents that allow defendants to represent themselves. The forms for pro se (self help) representation include a Motion to Quash, Motion to Dismiss, Affidavit in Support and a Motion for Protective Support. All forms are fillable and are accompanied with detailed instructions of how they should be used.

In preparing the documents, Syfert collaborated with other attorney’s listed on EFF’s website, and he has high hopes that they will be sufficient to dismantle USCG’s ‘pay-up-or-else’ scheme.

“My dream would be to have 10,000-20,000 people file all three documents to the lawyers and severely cripple the entire process and show them that you shouldn’t be allowed to join so many defendants,” Syfert informed TorrentFreak.

Two of the many defenses listed in the documents 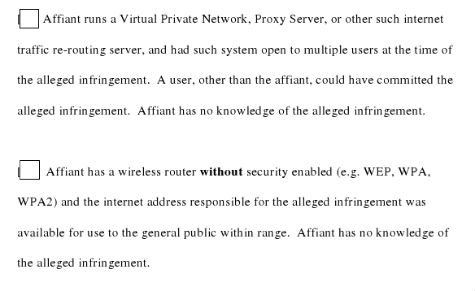 However, as is often the case when dealing with lawyers, there is a catch. When first contacting TorrentFreak, Syfert was offering the documents for sale, priced at $99.00. Although that’s still much cheaper than hiring an attorney, we voiced concerns that it looks like another attempt to make a few bucks off the lawsuits.

Luckily, these words didn’t go completely unnoticed to Syfert. “I decided to make it $9.99 instead of $99.00, probably for the next 5 days. Still cheaper than a DVD,” he told us after he slashed the price. Defendants can now buy the full package for under 10 bucks. To our best knowledge that is the cheapest solution to counter USCG’s threats thus far.

Even at the low price of $9.99, considering the target group of these cases it probably won’t take long for ‘pirated’ versions of these documents to appear on torrent and other file-sharing sites. Those tempted should keep in mind though that sharing copyrighted material without consent can sometimes lead to trouble, but it’s highly probable they know that already.