According to a release by the Department of Justice, yesterday Richard Franco Montejano of Harbor City, California, pleaded guilty before U.S. District Judge George H. King to one count of conspiracy to commit willful copyright infringement.

The single charge relates to the pre-release of the Kanye West album, ‘Graduation’, which which according to the DoJ was uploaded to a private server in August 2007, one week before its official release. According to Scene records, it was in fact uploaded 11 days before.

Montejano had previously admitted that from 2002 to 2007 he was the leader of the warez release group OSC (oL-sKOOL-cLASSiCS), a group dedicated obtaining music and making it available to the Scene in advance of its commercial release. 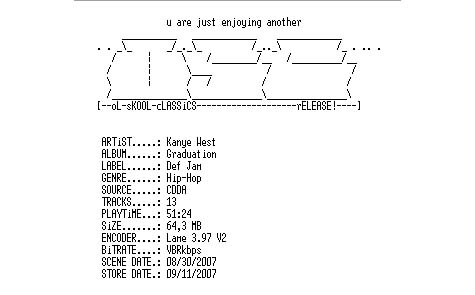 According to court documents, Montejano maintained OSC’s server and also admitted to uploading music to servers operated by other warez groups.

Following the January 2007 break up of another famous release group known as RNS (Rabid Neurosis), Montejano is said to have utilized the group’s two former suppliers known as ‘adeg’ (Bennie Glover) and ‘StJames’ (James Anthony Dockery). Both were employed at a CD pressing plant that manufactured for Universal Music.

Rabid Neurosis had operated over a longer period – between 1999 and 2007 – and were responsible for dozens of major releases including Eminem’s ‘Encore’ and ‘How to Dismantle an Atomic Bomb’ by U2.

Following their arrests, Glover and Dockery pleaded guilty to conspiracy to commit willful copyright infringement. Both were sentenced on January 15th 2010 to three months in prison and two years of supervised release.

However, in March 2010 two other RNS members, Matthew Chow and alleged group leader Adil Cassim, were found not guilty on charges of conspiracy to commit copyright infringement.

Montejano’s sentencing is scheduled for July 25th where, like those before him in both groups, he faces a maximum penalty of five years in prison and a $250,000 fine.