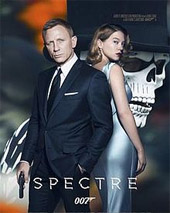 Late last week millions of pirates cheered behind their computers as the “screener season” finally got underway.

High quality copies of some of the hottest Hollywood productions appeared online, with some titles even beating their official theatrical release.

The torrent first appeared on several private sites before it leaked to more public venues such as The Pirate Bay and KickassTorrents, where thousands of users welcome the unexpected Christmas gift.

At the time of writing over more than 10,000 people are sharing a copy of the leaked screener, which is bound to hit over a million downloads before the end of the weekend.

Screenshot from the leaked Spectre screener

For Hollywood, however, the latest leak is casting a dark shadow over the festive season.

A lot has been said and done about the first leaks appeared a week ago. The FBI is trying to catch the perpetrators and hs already traced The Hateful Eight leak back to a Hollywood executive.

In addition, various movie companies have started to issue thousands of takedown requests in the hope that this will prevent at least some people from downloading their films without permission.

What it truly unique about the recent leaks, however, is that most can be traced to the same source: The Hive and CM8.

Hive-CM8 is a so-called release “group,” but not one that belongs to The Scene. Instead it’s a partnership of independent releasers which, unlike The Scene, proudly share their work with the rest of the world.

While little is known about Hive-CM8, sources inform TorrentFreak that less than a handful of people are involved. A relatively small operation, but one that has managed to ruin Christmas for a billion dollar industry.

Through its sources Hive-CM8 got their hands on many screener copies, of which it has published 11 so far, with Spectre being the most recent. However, in movie release notes they write that there are 40 titles in total, which means that more are on the way.

To our knowledge this is rather unprecedented. While screeners leak every year, we have never seen a batch of 40 copies being released by a single source in such a short period of time.

This “achievement” puts Hive-CM8 on the map, and not just among the cheering pirate crowd. The FBI is also watching the latest developments with interest and will try to find out who these pirates are.

That’s a risk Hive-CM8 is apparently willing to take, as evidenced by the recent release spree show.

Thus far the list of screeners released by the group is as follows: Spectre, The Hateful Eight, Legend, In The Heart of The Sea, Joy, Steve Jobs, Spotlight, Creed, Concussion, The Danish Girl, Bridge of Spies,

Many are wondering what else is in store. In particular, whether there’s a Star Wars screener in the batch. This can be ruled out though, as there is no known screener copy of the film out, and it would have certainly be one of the first screeners Hive-CM8 released.

If there are indeed 29 more screeners waiting in a queue then the following titles are among the likely contenders:

For Hollywood the hopes for a good Christmas now depends on the box office numbers reported after the weekend. One thing’s for certain, any and all setbacks in ticket sales will now have a clear scapegoat.