LimeWire is by far the most used filesharing application, with a market share of approximately 35%. Their popularity is declining worldwide – mostly due to the BitTorrent boom – but roughly 18% of all PCs worldwide still has the application installed.

Earlier this year, the company opened their official music store, which they have expanded ever since. Today LimeWire takes another step forward, as they announce the largest distribution deal since the store launched. They teamed up with “The Orchard“, which distributes more than 1.2 million songs, mostly from Indie labels.

Greg Scholl, President and CEO of The Orchard, said in a response to the announcement: “We’re pleased to support the LimeWire store, a retail offering that protects copyrights while fairly compensating artists and labels. This exciting entrant to digital retail offers us a unique opportunity to connect our clients with an online audience of potentially millions of new customers.”

Tracks from the Limewire store are 256kbps DRM-free MP3s and cost $0.99 each. However, there are significant savings to be had with some of the subscription plans. The ‘Platinum’ plan offers the best price, offering 75 ‘Download Credits’ for $19.99 a month, which works out to $0.27 per track. ‘Download Credits’, which is more reasonable that most other stores.

The LimeWire store is linked to the filesharing client (hmmm), meaning that LimeWire users will see “buy now” offer in the search results. This does of course drive a lot of new customers to the store, but it’s also an interesting marketing opportunity for record labels. Still, most of the big labels are hesitant to partner with the store.

The LimeWire team has also added some new features such as radio playlist integration. Users can browse the playlists of radio stations in their area, with direct links to buy the songs. “We’re focused on features that will allow people to discover new music as well as interact on a different level with their existing favorites,” Jason Pelzer, the LimeWire store Technical Director told TorrentFreak. 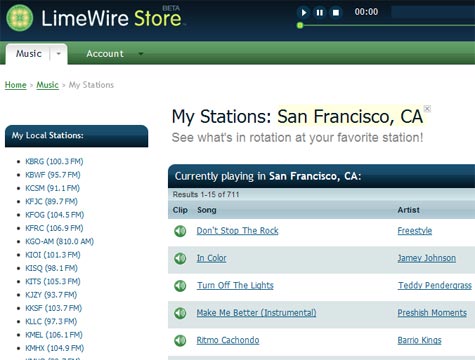 “LimeWire Store development has been running at full speed to provide a number of exciting new features, and we are enjoying the opportunity to improve our user community’s experience via the feedback they’ve provided,” he added.

One of the major downsides of the Limewire store is that it’s only available to US customers, due to licensing issues. In a way it’s also strange that the download store named after and developed by a P2P company, doesn’t use P2P to distribute their content. Other than that, the service looks like a good alternative to most of the music stores that are currently out there.