Tonight, August 26, at the T-Mobile Arena in Las Vegas, Floyd Mayweather Jr. will finally meet UFC lightweight champion Conor McGregor in what is being billed as the biggest fight in boxing history.

Although tickets for inside the arena are still available for those with a lot of money to burn, most fans will be viewing on a screen of some kind, whether that’s in a cinema, sports bar, or at home in front of a TV.

The fight will be available on Showtime in the United States but the promoters also say they’ve done their best to make it accessible to millions of people in dozens of countries, with varying price tags dependent on region. Nevertheless, due to generally high prices, it’s likely that untold thousands around the world will attempt to watch the fight without paying.

That will definitely be possible. Although Showtime has won a pre-emptive injunction to stop some sites offering the fight, many hundreds of others are likely to fill in the gaps, offering generally lower-quality streams to the eager masses. Whether all of these sites will be able to cope with what could be unprecedented demand will remain to be seen, but there is one method that will thrive under the pressure.

Torrent technology is best known for offering content after it’s aired, whether that’s the latest episode of Game of Thrones or indeed a recording of the big fight scheduled for the weekend. However, what most ‘point-and-click’ file-sharers won’t know is that there’s a torrent-based technology that offers live sporting events week in, week out.

Without going into too many technical details, AceStream / Ace Player HD is a torrent engine built into the ever-popular VLC media player. It’s available on Windows, Android and Linux, costs nothing to install, and is incredibly easy to use.

Where regular torrent clients handle both .torrent files and magnet links, AceStream relies on an AceStream Content ID to find streams to play instead. This ID is a hash value (similar to one seen in magnet links, but prefaced with ‘acestream://’) which relates to the stream users want to view.

Once found, these can be copied to the user’s clipboard and pasted into the ‘Open Ace Stream Content ID’ section of the player’s file menu. Click ‘play’ and it’s done – it really is that simple.

AceStream is simplicity itself 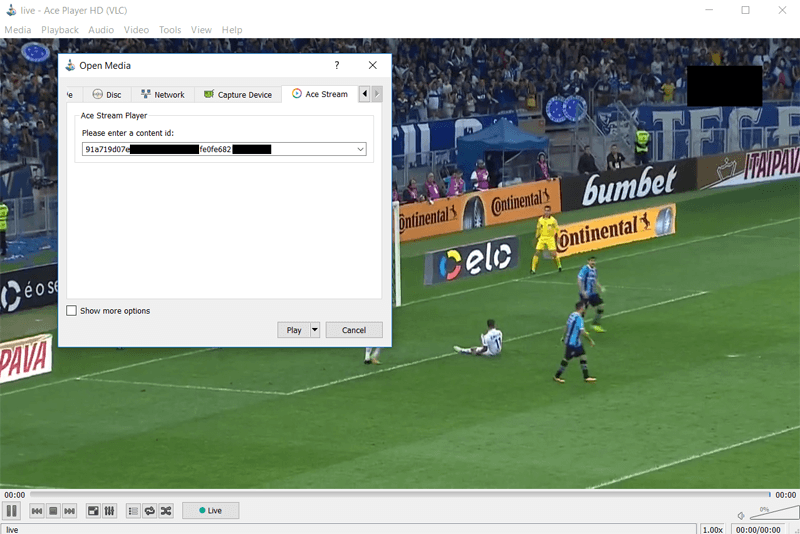 Of course, any kind of content – both authorized and unauthorized – can be streamed and shared using AceStream and there are hundreds of live channels available, some in very high quality, 24/7. Inevitably, however, there’s quite an emphasis on premium content from sports broadcasters around the world, with fresh links to content shared on a daily basis.

The screenshot below shows a typical AceStream Content ID indexing site, with channels on the left, AceStream Content IDs in the center, plus language and then stream speed on the far right. (Note: TF has redacted the links since many will still be live at time of publication) 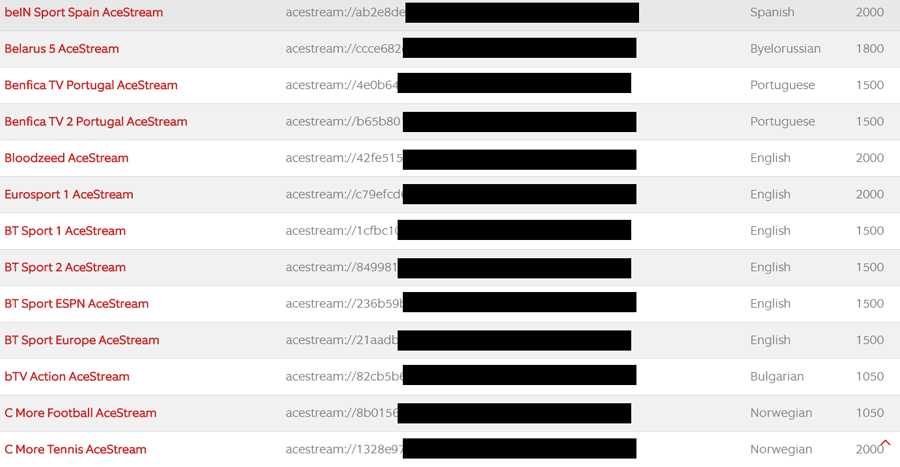 While streams of most major TV channels are relatively easy to find, specialist channels showing PPV events are a little bit more difficult to discover. For those who know where to look, however, the big fight will be only a cut-and-paste away and in much better quality than that found on most web-based streaming portals.

All that being said, for torrent enthusiasts the magic lies in the ability of the technology to adapt to surging demand. While websites and streams wilt under the load Saturday night, it’s likely that AceStream streams will thrive under the pressure, with viewers (downloaders/streamers) also becoming distributors (uploaders) to others watching the event unfold.

With this in mind, it’s worth noting that while AceStream is efficient and resilient, using it to watch infringing content is illegal in most regions, since simultaneous uploading also takes place. Still, that’s unlikely to frighten away enthusiasts, who will already be aware of the risks and behind a VPN.

Ace Streams do have an Achilles heel though. Unlike a regular torrent swarm, where the initial seeder can disappear once a full copy of the movie or TV show is distributed around other peers, AceStreams are completely reliant on the initial stream seeder at all times. If he or she disappears, the live stream dies and it is all over. For this reason, people looking to stream often have a couple of extra stream hashes standing by.

But for big fans (who also have the money to spend, of course), the decision to pirate rather than pay is one not to be taken lightly. The fight will be a huge spectacle that will probably go down in history as the biggest combat sports event of all time. If streams go down early, that moment will be gone forever, so forget telling your kids about the time you watched McGregor knock out Mayweather in Round Two.