Major Labels Prepare to Take Another Bite Out of Grooveshark

When discussing Grooveshark with representatives of the company, they are very clear indeed. The music streaming service is 100% legitimate and is always looking to work with artists to monetize their content.

However, over the past several years Grooveshark has been tangled up in legal battles with all of the major labels over copyright and licensing related issues, conflicts which appear to have cooled but have yet to go away.

But despite a toning down of the war rhetoric and a recently signed deal with Sony, Grooveshark has failed to become a service the labels are prepared to recommended to the public as they would a product like Spotify. In fact, there are signs that the labels still have bad feeling towards the US-based company, and not just on home soil either.

The BPI has now embarked on two major rounds of bulk site blocking in the UK. These initiatives first appear as communications sent out to members of music licensing outfit PPL in which they are asked if the sites listed have procured any licenses. The information is sent back to the BPI and then several months later court-ordered High Court blocking takes place.

After learning of the first batch mid 2012, in May 2013 TorrentFreak learned that the BPI was preparing the way for a second site blocking blitz.

That process was completed on October 30 when the majority but not all sites on the May list were blocked by UK ISPs.

As we noted at the time, one of the sites that remained unblocked despite being on the list was Grooveshark. Had the labels decided to let Grooveshark go, free to swim another day? New information received by TorrentFreak this week suggests that is almost certainly not the case.

In fresh correspondence sent out by PPL on behalf of the BPI, members are being asked about Grooveshark in the same format as they have been in previous preludes to site blocking. 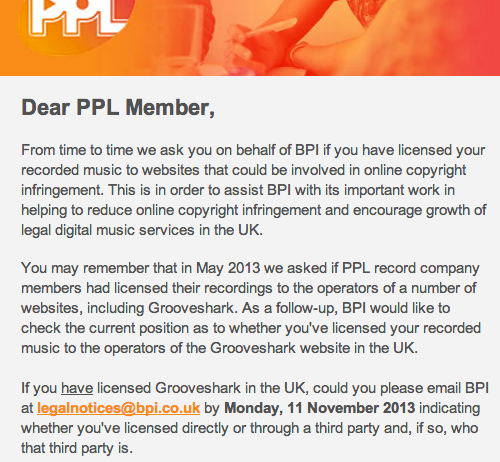 While it seems fairly obvious what this is all about and where it will lead, speaking with TorrentFreak the BPI was a little more circumspect over the nature of this member polling.

“BPI regularly carries out intelligence on unlicensed websites. This helps to help protect musicians and support the growth of legal music services,” the music group told us.

“Checking with our and PPL’s members to see if they have licensed particular websites is an ongoing part of this process. It’s something we did in respect of Grooveshark earlier this year and we are now updating our records to ensure they remain accurate.”

TorrentFreak reached out to Grooveshark to discuss the information detailed above but in line with our requests for comment on similar topics in the past, the company failed to respond to our emails.