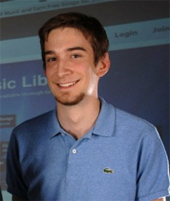 Josh Greenberg, the co-founder of the recently shuttered Grooveshark music streaming service, has been found dead in his Florida home.

The 28-year-old was discovered in his bed Sunday evening by his girlfriend in the house they shared.

“Josh Greenberg, co-founder of #Grooveshark was found dead in his Gainesville home Sunday evening. No evidence of foul play or suicide,” local police reported on Twitter.

Lori Greenberg, Josh’s mother, told Gainsville.com that her son had “never been sick a day in his life” and police had informed her that there was no evidence of any injuries or involvement with drugs.

“They are as baffled as I am,” she said. “It looked like he was sleeping.”

The popular entrepreneur’s mother briefly mentioned the closure of Grooveshark earlier this year after a prolonged legal battle with the major recording labels of the United States. She said that her son had been “more relieved than depressed” that the matter had been brought to an end.

“He was excited about potential new things that he was going to start,” she said.

Josh Greenberg and Sam Tarantino founded Grooveshark as 19-year-old freshmen at the University of Florida in March 2006. The company grew to become a major player in the streaming market with close to 150 employees but was continuously dogged by licensing and related copyright issues.

After spending increasing amounts of time and money on its legal defense, Grooveshark eventually threw in the towel at the end of April this year. Parent company Escape Media entered into a consent judgment with Universal Music Group, Sony Music Entertainment and Warner Music Group which saw the operation shut down for good.

Friend Ben Erez, who describes Josh as his mentor, heaped praise on the entrepreneur.

“There are people whose names I hear over and over again who end up disappointing when I finally meet them. When I met Josh for the first time, I felt the opposite. Here was a guy who deserved every word of praise I had heard,” he wrote.

“I’m sad and shocked but I can’t stop imagining what Josh would say. Probably something very zen like ‘appreciate me for who I was, mourn my loss, and get back to enjoying life. It’s too short to not’.”

Comments from Josh’s girlfriend Abby Mayer cited in a police department report note that her spouse was not known to be sick or on any prescribed medication.