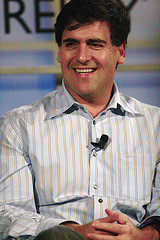 So, here’s Cuban’s argument. He believes that from the business standpoint, BitTorrent and other peer-to-peer technologies are great. They save massive amounts of bandwidth and help efficiently distribute large media files, possibly even speeding up transfers. We agree with everything up ’til here.

But now he goes on to say that although content creators can profit from BitTorrent, users are getting screwed. Why? Here are his reasons.

On conflicting clients he says, “When multiple clients are installed on a PC, not only does that create confusion among users, its a ‘last installed, first in charge’ approach. THat approach and lack of respect for other clients will lead to user configuration problems.”

Okay, number one, if you’re referring to file associations, ie. the most recently installed app is associated with the file type, then this “problem” is not limited to BitTorrent clients. Everything from graphic editors (Photoshop, Gimp) to music management applications (iTunes, WinAmp) do this. Secondly, if this causes confusion among users, then how do millions of people manage to get their music into iTunes and sync it to their iPods without accidentally having their mp3s added to the Windows Media Player library? This “lack of respect” isn’t so much about BitTorrent client developers trying to steal users from their competitors, as it is about how operating systems function today.

Onto point two. “End Users dont understand how P2P works, and once they do, they get concerned about giving up bandwidth.”

I hear BitTorrent transfers make up about one third of all traffic on the Internet these days. It seems rather likely that end users do in fact understand how P2P works. And unless their other online activities are hindered by BitTorrent or P2P, I don’t see users really having a problem with the uploads. Most don’t even bother uploading once their file has been download, and since the majority of users download torrents from public trackers, they aren’t forced to either.

Mark’s third point, “The P2P model of seeding is a HUGE problem for those using wireless broadband with bandwidth constraints or per bit or per minute costs. People are going to wake up and find that they owe Verizon, Sprint, whoever a lot more than they ever thought possible because they installed a client on their Laptops. That could lead to these networks blocking the protocol.”

Point three actually makes sense. The real problem here is miscommunication. In developing countries like India, ISPs milk customers for money by charging them for every MB downloaded, and in some cases, for every minute spent online. Some ISPs (Sify, for one) even lie about unlimited plans and have per-day limits (eg. 200 MB), which, if exceeded, cause the number of days the plan is valid for (usually a month) to be reduced every time the download limit is excedded. Someone I know actually ran up a bill of several hundred dollars because he thought he was on an unlimited plan, whereas in reality his ISP hadn’t processed his request to change plans. But as BitTorrent and P2P grow in popularity, users are quickly starting to demand ‘unlimited’ plans. If you look at the trend, ISPs are more likely to cash in on the P2P phenomenon and offer unlimited plans for a premium than start blocking protocols. And although per-bit and per-minute plans are widespread in developing countries, I don’t know how much of a problem they are to European, Australian and North American users.

Cuban’s last point is, “There is a misconception that there is bandwidth savings for the end user. If you want to download a 1gb size file, 1gb of data will be delivered to your PC. There is no savings of bandwidth on the client side. In fact, the client is charged a bandwidth premium because after they have received the entire file, they are asked to particpate in the peering by delivering parts of the file to other users.”

Guess what, the end user doesn’t care if he’s uploading bits while downloading. Unlike hosting providers, the user incurs no cost from constantly uploading data. It doesn’t matter, as long as he can go about his other activities. And unless he’s on a per-bit or per-minute plan, no “bandwidth premiums” are going to be charged to him. Also, no one is asking the user to “participate in the peering” (or simply, seed) once his download is complete. That is only a requirement of select private trackers.

When it comes to utilising BitTorrent in business, as part of a content store, I think Cuban’s looking at it the wrong way. When the various BitTorrent stores (BitTorrent.com, Zudeo.com) are up and running, content creators are not going to be getting a free ride. Users are not going to pay the same price they do at conventional stores like the iTunes Store and Amazon Unbox. Why should they? They’re acting as servers for content creators and are distributing content for no charge at all. But since money isn’t being deducted from their bank accounts, and seeding a torrent is not really affecting their web browsing, users are okay with uploading.

Keep in mind, this business model will only work if the rates at BitTorrent-powered content stores are significantly lower than conventional ones. In other words, users aren’t just going to let themselves be ripped off. If they feel they’re getting a raw deal, they’ll head straight to “illegal” torrent sites like The Pirate Bay and Isohunt. In fact, that’s what users are doing right now!

I’m open to the possibility that I’m dead wrong. I don’t know, maybe Cuban is right. Maybe BitTorrent is in fact doomed, and the video streaming technologies he pioneered with Broadcast.com in the 90s will make a major comeback. I mean, who uses BitTorrent these days? Just a bunch of pirates, soon to be exiled to metal platform in the middle of the North Sea. Right? Right.

What do you think? Are the days of P2P over? Is the the balkanisation of BitTorrent imminent?