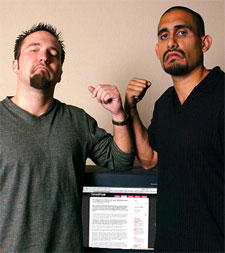 MediaDefender determines the effectiveness of their spoofs and decoys by analyzing the top search results for the file in question, mostly movies and music albums. If 2 out of 10 top search results are fake files spread by them, their effectiveness is 20% on that particular BitTorrent site. Their goals is of course to get as many fake files in there, hoping people will end up downloading useless data.

There is a lot of variance in the reported effectiveness between BitTorrent sites and the different decoy projects. We scanned through most of the reports and it seems that The Pirate Bay and Mininova were best protected against fake files whereas MediaDefender was more effective on sites like BiteNova and TorrentPortal.

Niek from Mininova, the toughest site to get onto according to MediaDefender, wrote a blog post in response to the leaked MediaDefender emails. He sums up some of the quotes that show how well protected Mininova is. Niek adds, “We can only be grateful for the many nice words from our friends at MediaDefender. All thanks go to our great moderating team, who did (and do) great work.”

The Pirate Bay has always been one of MediaDefender’s main targets because this site is often mentioned in the press. Unfortunately for MediaDefender The Pirate Bay is also one of the sites that is well protected against fake files.

In July, Brokep from The Pirate Bay already told us that they were doing all they can to block Media Defender from accessing their trackers. “We block them and some other torrent sites do as well.” he said.

This apparently annoyed MediaDefender, as we can see from one of their emails regarding the effectiveness of their decoys for Micheal Moore’s Sicko: “we still have no presence on Pirate bay which is a site they [Weinstein?] are likely watching as it was mentioned in the AdAge article they referenced.”