With still a few days to go it is probably safe to say that MediaDefender is one of the biggest losers of 2007. The leaked emails, published by the notorious “MediaDefender-Defenders“, gave away a lot of sensitive information and details about how MediaDefender sabotaged BitTorrent trackers and other file-sharing networks. Despite the fact that their decoy and spoofing operations were hugely ineffective on most BitTorrent sites, the company collected millions of dollars from the entertainment industry for protecting their content.

Unfortunately for them, one of their employees was stupid enough to forward all his work email to his Gmail account, without using a proper password. To make it even worse, more sensitive information started to leak as the email leak was soon followed by a p2p tracking database, a phone call and a collection of anti-piracy tools they used for their daily operations.

Soon after this sensitive information became public, the Pirate Bay launched a counterattack. They decided to use the information from the emails to file charges against some of MediaDefenders customers including Paramount Home Entertainment, Twentieth Century Fox and Universal Music Group for corrupting and sabotaging their BitTorrent tracker.

The leak did not have any effect on the stock price initially, but after the company announced that it had cost them $825,000, it started to drop hard. It turned out that MediaDefender’s parent company ArtistDirect spent $600,000 to compensate their customers and the rest of the money was used to cover legal expenses. The investors weren’t too happy about this news as can be seen from the picture below. 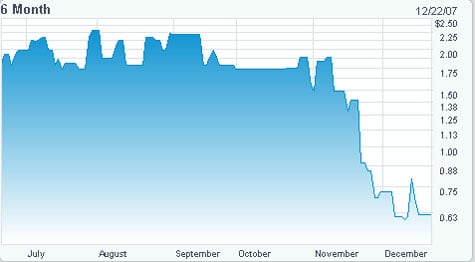 So what will happen now, will the company walk the plank to bankruptcy? Many people think it will, but MediaDefender still sees a future in the anti-piracy business. Sure, they were devastated by the leaks, but remarkably, they believe that it didn’t hurt the goodwill of the company. Makes you wonder what is needed to hurt this then, because it can’t get any worse if you ask me.