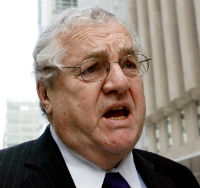 Two days ago a massive operation took down MegaUpload, one of the world’s leading file-storage services.

Eight people we charged with criminal copyright infringement charges, and all files hosted on the site were pulled offline.

What follows now is an unprecedented court battle, one that could possibly change the future for many file-hosting sites and cloud hosting services.

Yesterday one of the “Mega” employees informed TorrentFreak that MegaUpload has hired top attorney Robert Bennett to lead the defense.

Bennett is best known for defending President Bill Clinton during the Lewinsky scandal.

“We intend to vigorously defend against these charges.” was Bennett’s only comment thus far, but fireworks can be expected in the weeks to come.