Last week, these companies filed a new lawsuit at a federal court in Virginia, targeting four VPN services. In their complaint, the filmmakers accuse Surfshark, VPN Unlimited, Zenmate and ExpressVPN of being involved in widespread copyright infringement.

The complaint sums up a long list of alleged wrongdoings. This includes allowing VPN subscribers to bypass the geographical restrictions of streaming services such as Netflix.

“Defendants advertise their service for allowing their subscribers to bypass regional restrictions of streaming platforms to stream copies of copyright protected content including Plaintiffs’ Works from locations Plaintiffs have not authorized the platform to stream the Works,” the lawsuit reads.

The filmmakers list various examples of promotional pages where the VPN providers claim that their services can bypass blocking efforts and other restrictive measures. In some cases, these are fairly outspoken, as the following announcement from UnlimitedVPN illustrates.

In addition to bypassing geographical restrictions, the filmmakers also list various examples of VPN subscribers who are directly involved in sharing pirated movies via BitTorrent.

While BitTorrent can also be used legally, the VPN companies allegedly promote their service as a tool to download copyright-infringing material anonymously.

“Defendants promote their VPN services as a tool that can be used to pirate copyright protected content without getting caught,” the complaint reads.

“The records show Defendants’ subscribers downloaded the torrent files for reproducing Plaintiffs’ motion pictures such as The Brass Teapot, Hellboy, Rambo V: Last Blood, Angel Has Fallen, London Has Fallen, 2 Guns, And So It Goes, Beyond a Reasonable Doubt…”

The filmmakers argue that some VPNs “partner” with notorious movie piracy websites to promote their service. For example, the site YTS.movie encourages the use of ExpressVPN. It’s not immediately clear whether ExpressVPN is aware of that, however. 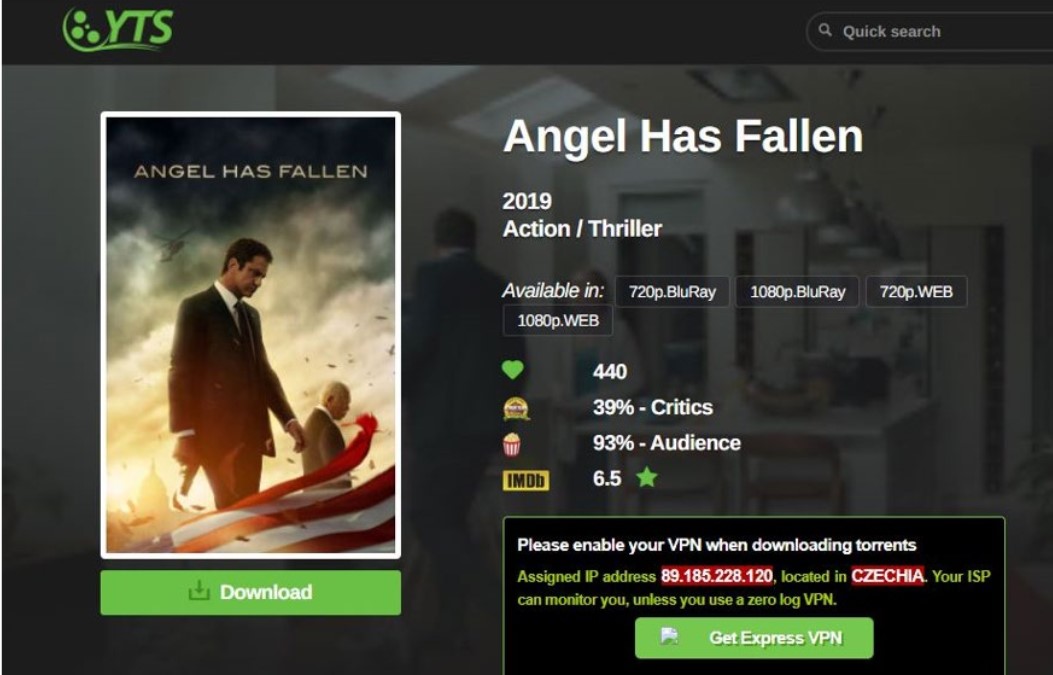 The movie companies further allege that VPN customers are engaged in other types of “outrageous conduct” under this privacy shield, including racist comments, child pornography, and even committing murder.

The rightsholders have sent thousands of copyright infringement notices to hosting companies, which were reportedly forwarded to the VPN defendants. However, based on these notices, the accused VPNs can’t pinpoint individual subscribers.

Most VPN users are connected to shared IP addresses that can’t be directly tied to single users, so the VPN companies simply don’t know which subscribers are flagged. According to the movie companies, VPNs can easily overcome this problem by logging user data.

Based on these and other claims, the filmmakers argue that the VPN services are liable for direct, contributory, and vicarious copyright infringement. Through this lawsuit, they request compensation for the alleged damage.

In addition to money, the filmmakers also request that the VPN services start blocking known pirate sites such as The Pirate Bay and RARBG, which have been listed in the notorious markets list of the US Trade Representative.

Furthermore, they request an order that required the VPN companies to terminate the accounts of subscribers for which they receive three unique copyright noticed within 72 hours, unless the subscriber appeals.

Needless to say, these are broad allegations that will likely be contested in court. At the time of writing, the VPN providers have yet to file an official response.

This isn’t the first time that VPN providers are facing copyright infringement allegations. Previously, VPN.ht was sued as well, while Private Internet Access and TorGuard were recently added to previously filed lawsuits against Quadranet and LiquidVPN respectively.

A copy of the complaint against Surfshark, VPN Unlimited, Zenmate, and ExpressVPN, which the movie companies filed at a federal court in Virginia, is available here (pdf)