When the U.S. Government shut down Megaupload in 2012, Internet traffic volumes dropped all over the world.

The destruction of one of the largest file-hosting services came as a shock to hundreds of millions of users, but particularly to the key players involved.

While the authorities had hoped to resolve the case swiftly, the opposite happened. Aside from Andrus Nomm’s plea deal years ago, there hasn’t been any progress in the criminal proceedings against Megaupload’s founder and his co-indicted associates.

After more than eight years, it is still not clear whether Megaupload founder Kim Dotcom and his associates will ever stand trial in the US. They have and continue to fight this request tooth and nail in New Zealand.

While all parties await the outcome, which could take several more years, the criminal case in the United States remains pending. The same goes for the civil cases launched by the MPAA and RIAA in 2014.

This brings us to two new filings Megaupload’s legal team submitted at a Virginia federal court this week. The defunct file-sharing platform requests to keep the RIAA and MPAA cases on hold for at least six more months, noting the lack of movement in the criminal case.

“The Criminal Action is still pending, and none of the individual defendants have been extradited,” writes Megaupload attorney Craig C. Reilly, asking the court to stay the cases.

This request and the court’s swift approval to extend the delay until October doesn’t come as a surprise. The MPAA and RIAA didn’t object to it and similar requests have been granted more than a dozen times already. 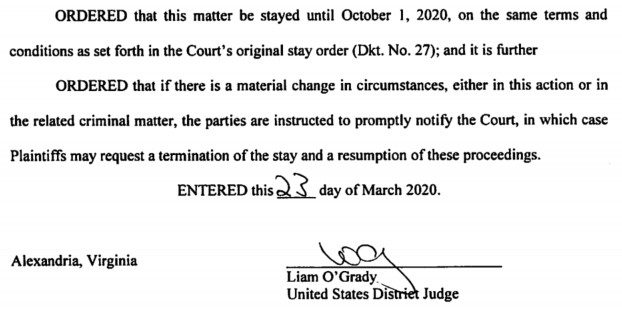 The civil cases are not expected to start until after the criminal case in the U.S. has been ‘resolved.’ That can take several more years. Meanwhile, data from Megaupload’s servers remains securely stored, possibly to serve as evidence in the future.

Previously there have been attempts to make it possible for millions of former Megaupload users to retrieve their personal files. However, in recent years there hasn’t been any update on this front.

Similarly, the U.S. Department of Justice announced eight years ago that it would work on a solution to allow rightsholders to check whether their content was shared on Megaupload or related sites. Today, this feature is still listed as being “under construction.”