The MPAA just released their latest box-office statistics. Despite the continuing threat of online piracy the numbers once again show an increase in revenue worldwide, up to a record-breaking $35.9 billion in 2013.

In addition to the revenue increase, the movie group emphasizes the importance of new technology in expanding its audience. The MPAA stresses that frequent moviegoers are also technology fanatics, with nearly three-quarters owning at least four new devices.

Smartphones are particularly popular among movie fans, and the MPAA notes that the movie industry can do more to use this technology to boost theater attendance even further.

“We need to keep exploring fresh ways of leveraging our new technology to drive traffic to your theaters,” MPAA CEO Chris Dodd said at The Colosseum inside Caesar’s Palace where the findings were presented.

“We can embrace technology, and use it to complement our offerings….A smartphone can make more content available, but it will never be able to surpass the shared experience that you deliver to every person who sits in your theaters,” he added. 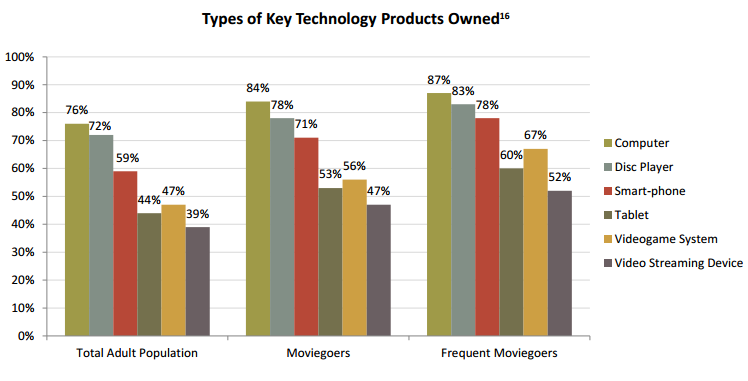 With the release of these statistics the MPAA wants to show that technology is not just a threat to the movie industry, but also an opportunity. While this is certainly true, the statements are not without conflict.

Using smartphones to drive more people to the movies also presents a problem, as the MPAA doesn’t want them to be used inside the theater.

The MPAA has previously published a set of anti-piracy practices movie theater owners should adhere to. This includes a very skeptical stance against any device that can be used to capture video, including smartphones.

“Theater managers should immediately alert law enforcement authorities whenever they suspect prohibited activity is taking place. Do not assume that a cell phone or digital camera is being used to take still photographs and not a full-length video recording,” the group adds.

Past anecdotes show that theaters take these recommendations very seriously. A few years ago a girl was arrested for recording a 20 second clip from the movie Transformers on her phone, and more recently a Google Glass wearer was handed over to the authorities, without recording anything.

The above is a classical example of the dual role technology plays for the entertainment industries. Nearly every new invention poses both threats and opportunities, and the challenge is to find the right balance between them.