When the MPAA shut down the main PopcornTime.io fork late last year, many of its developers switched to the project’s ‘legal’ spin-off Butter.

Unlike Popcorn-Time, Butter doesn’t include any links to pirated movies and TV-shows. Instead, it acts as a general purpose streaming tool and actively promotes content that’s freely published by indie filmmakers.

Despite this neutral setup, a recent series of takedown requests Hollywood’s MPAA sent to GitHub threatens to pull the project’s code offline.

Correspondence seen by TorrentFreak shows that the MPAA has been asking GitHub to remove the repository of the recently revived PopcornTime.sh, as well as all related forks.

“There are multiple ‘forks’ of Popcorn Time, all of which are 100% unlicensed and infringing, and many of which have been subject to litigation and court orders around the world confirming their infringement,” the MPAA informs GitHub.

“Popcorntime.sh is one of the more recent infringing ‘forks,’ and we attached several specific examples of that site’s infringement to our prior letter. The Project provides to any member of the public the software needed to develop and release additional infringing Popcorn Time forks, and thereby enables infringement on a massive scale.”

In their notices the MPAA lists several files that are “most clearly and unambiguously designed” to deliver or find infringing content, including package.json and torrent_collection.js which are sourced from Butter. Several of the other files that are mentioned have nothing to do with Butter. 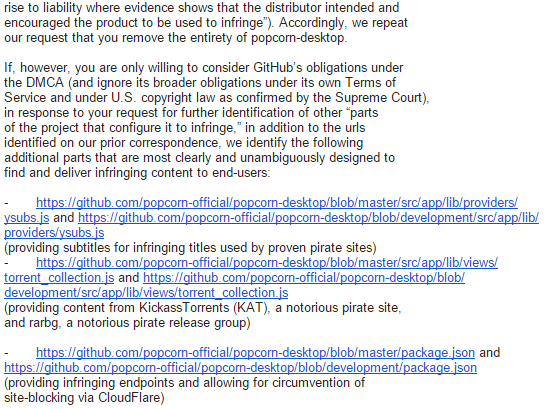 A few hours ago the notices were forwarded to several Butter related projects, including a fork operated by the Brazilian Ministry of Culture, giving the operators 24 hours to respond before their entire codebase is pulled.

Leo Germani, a representative of the Brazilian Ministry of Culture, informed us that they have already responded to GitHub.

“We answered GitHub clarifying that our project is a fork of the Butter project, not Popcorn Time, which we believe is totally unrelated to Popcorn Time and does not have any code that infringes copyright,” Germani says.

“We have been discussing and researching the use of P2P protocols for content distribution and we were excited when we got in touch with the Butter project, which aims to use the power of P2P to distribute licensed audiovisual content,” he adds.

Brazilian technology company Hacklab informed TorrentFreak that one of their repositories was targeted as well.

“Butter is a great technology that can reduce the cost of distributing videos and has the potential to boost the development of our local film industry. As a digital technology company we have to keep up with the most promising technology trends, and Butter is one of these,” Hacklab’s Luis Fagundes says.

“This notification is insane, as it’s directed to a different project and cites a bunch of files that do no violation at all. Unfortunately, the cost of this irresponsibility is high: it causes harm to developers and businesses who, instead of producing value to society, have to respond to a takedown threat,” he adds.

Talking to TorrentFreak, another developer explained that the MPAA’s description of the files is not totally accurate. The package.json file, for example, is not infringing and merely serves as the main entry point for the application.

The torrent_collection.js file, which isn’t enabled by default, allows users to add random torrent files to Butter but doesn’t link to any specific infringing material. The developers hope that their response will be sufficient to keep the project online.

Strangely enough, the people behind the PopcornTime.sh fork itself have not yet been contacted by GitHub and their repository remains online at the time of writing. (see update)

Finally, it’s worth mentioning that GitHub is treating the issue very carefully. The MPAA has sent several requests over the past several weeks and Github has repeatedly requested further clarification and additional details.

However, despite GitHub’s vigilance the MPAA isn’t giving up, urging the developer platform to go above an beyond the DMCA to help combat potential copyright infirngements.

“We hope you agree that GitHub’s responsibility to not knowingly assist in a massive copyright infringement operation does not end with its DMCA policy,” the MPAA told the platform.

Update: After publication we were informed that the official Popcorn Time repository has also received a takedown notice.

It has now been more than 24hours since your Takedown notice, we have still to hear from our previous comment, but there are a few things we’d like to point out.

It has been brought to our attention that you sent this notification to all Butter forks, between them many of our clients that our now asking us for answers, one notable entity that got notified is the Brazilian the Ministry of Culture.

We understand that your quire is with the ‘popcorn-official’ fork of our project, as you know we have no control of what our forks decide to do with our code, we can’t be liable for what they do nor can other people forking us.

Exceding the fact that the DMCA is intended for hosted content violating copyright (here the hosted content is the code, and we have 100% copyright over the code), not to bully activities you don’t like. We Butter Project never released any app, nor had in our history a way to ‘assist in a massive copyright infringement’.

Our project goal is to build great VOD streaming apps, this statement ‘literally all of the Project’s source code “could be used to locate infringing material”—in fact, this is its very purpose.’ is hence plane wrong.

In a nutshell, these massive (and abusive ?) takedown notices are harming us, our reputation, the trust we built with our customers, and our community (went from 720 to 585 forks on butter-desktop).

Any quick analysis will show that there is absolutely no base for the supposed infringements:

this a plugin for tvshowtime.com how is that infriging ? should we sent DMCA notices to all of it’s implementations ?

this file has never been part of our project.

that file is a generic plugin for a ‘tvapi’ endpoint that is a freesoftware daemon with many plugins for different data sources, we removed that file as we weren’t using anyway.

this feature, not enabled by default, allows you to drop a random torrent on butter, we’ll look for that torrent on kat, but we don’t pull content from kat, the torent is user provided.

how can this be infriging ? this is a standard entrypoint for any node-webkit app…

To make things clear:
– Butter never allowed to distribute copyright infringing content
– Butter is not affiliated in anyway with the popcorntime.sh fork, we
don’t know who they are.
– We ask GitHub to desist from being the tool used by bullies to cripple
free software.
– We ask GitHub to back us up because this sets a stanza of what the
DMCA is for: hosted-content copyright infrigement.