IsoHunt Takes Down BitTorrent Trackers in the US

As of earlier today, we have disabled access from users in the US to our trackers. This goes for ALL trackers (torrentbox, podtropolis) we run. This is due to the US’s hostility towards P2P technologies, and we feel with our current lawsuit brought by the MPAA, we can no longer ensure your security and privacy in the US. So, if you’re outside the US, you may notice less peers. We encourage you to add other public, unhampered trackers to torrents you post, in addition to Torrentbox and Podtropolis’s trackers.

IsoHunt is not alone in their battle with the MPAA. Last month TorrentSpy, another site named in the MPAA lawsuit blocked access to US users on their site. However, the takedown of IsoHunt’s trackers will have an even bigger effect on the BitTorrent community worldwide, especially because TorrentBox runs one of the biggest public BitTorrent trackers. As mentioned by the Isohunt team, this means that users outside the US will see less peers connected to their torrents which may result in slower download speeds.

The MPAA announced the lawsuit (PDF) against Torrentspy, Torrentbox and Isohunt in February 2006. Isohunt owner Gary later told TorrentFreak that they will not bow down to the MPAA. Isohunt hired a top-notch lawyer, specialized in Internet copyrights. It now seems that this wasn’t enough to keep the trackers in the air. For now, the websites are still available to US visitors.

The MPAA argues that the sole purpose of these BitTorrent trackers and sites is to share copyrighted content. But they are wrong according to Gary, who said, “We process copyright takedown requests daily, and have done so for hundreds of requests in the past, if not thousands. We work with all copyright owners, and even the RIAA email us routinely. The MPAA is the only organization unwilling to cooperate with us.”

Luckily, quite a lot of torrents are tracked by more that one tracker these days. And if that doesn’t work there’s always DHT. You can read more about how to protect yourself from failing BitTorrent trackers in this article. Long live the hydra!

To be continued. (Thanks Tom) 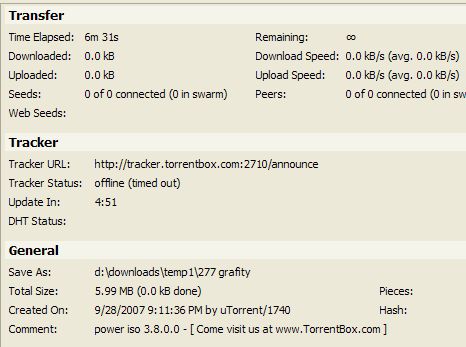