In recent years, piracy streaming tools and services have become a prime target for copyright enforcers.

This is particularly true for the Alliance for Creativity and Entertainment (ACE), an anti-piracy partnership forged between Hollywood studios, Netflix, Amazon, and more than two dozen other companies.

The complaint, filed at a California federal court on Friday, further lists company owner Jason Labbosiere and employee Nelson Johnson among the defendants.

According to the movie companies, the Set TV software is little more than a pirate tool, allowing buyers to stream copyright infringing content.

“Defendants market and sell subscriptions to ‘Setvnow,’ a software application that Defendants urge their customers to use as a tool for the mass infringement of Plaintiffs’ copyrighted motion pictures and television shows,” the complaint reads.

In addition to the software, the company also offers a preloaded box. Both allow users to connect to live streams of TV channels and ‘on demand’ content. The latter includes movies that are still in theaters, which SET TV allegedly streams through third-party sources.

“For its on-demand options, Setvnow relies on third-party sources that illicitly reproduce copyrighted works and then provide streams of popular content such as movies still exclusively in theaters and television shows.” 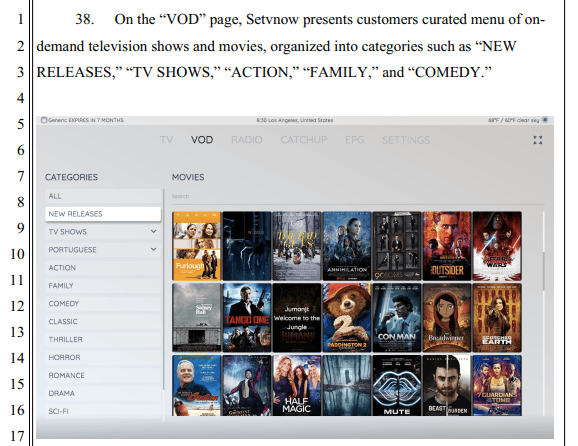 The intended use of SET TV is clear, according to the movie companies. They frame it as a pirate service and believe that this is the main draw for consumers.

“Defendants promote the use of Setvnow for overwhelmingly, if not exclusively, infringing purposes, and that is how their customers use Setvnow,” the complaint reads.

Interestingly, the complaint also states that SET TV pays for sponsored reviews to reach a broader audience. The videos, posted by popular YouTubers such as Solo Man, who is quoted in the complaint, advertise the IPTV service.

“[The] sponsored reviewer promotes Setvnow as a quick and easy way to access on demand movies: ‘You have new releases right there and you simply click on the movie … you click it and click on play again and here you have the movie just like that in 1 2 3 in beautiful HD quality’.”

The lawsuit aims to bring an end to this. The movie companies ask the California District for an injunction to shut down the infringing service and impound all pre-loaded devices. In addition, they’re requesting statutory damages which could go up to several million dollars.

“‘Setvnow’ and other piracy software applications undermine the legal market for films and television shows, causing harm to a vibrant creative economy that supports millions of workers around the world,” an ACE spokesperson told TorrentFreak responding to the news.

“ACE is dedicated to protecting creators and reducing online piracy through dedicated actions against illegal enterprises like ‘Setvnow’.”

At the time of writing the SET TV website is still in the air, selling subscriptions. The company itself has yet to comment on the allegations.

A copy of the complaint is available here (pdf), courtesy of GeekWire.

IPTV Pirates Who Lost $90m Lawsuit Lose Another Worth $130m