The fansub community “DivX Finland” has been translating subtitles for foreign TV-shows and movies since 2003.

Their fansubs have been downloaded 26 million times over the years and are generally used with pirated TV-shows and movies. However, during the past few days the hobbyist group got the ultimate recognition from an unlikely corner.

This week Netflix debuted its movie streaming service in Finland, but not without making a rather embarrassing ‘mistake’.

Instead of displaying official Finnish subtitles, Netflix was caught using DivX Finland’s fansubs on the Canadian-American science fiction series Andromeda. It’s possible that Netflix made this same ‘error’ for other TV-shows and movies as well.

DivX Finland was quickly alerted to this atypical usage of their work and the group jokingly noted on Twitter that Netflix never asked for permission to use the subtitles.

“It’s nice to see that the texts are used, but they did not ask permission,” they wrote, adding a link a clip from the Netflix video where DivX Finland’s credits are clearly visible. 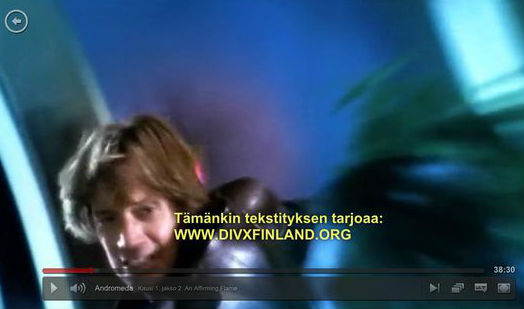 Responding to the mishap, Netflix apologized for the use of the unauthorized subtitles and assured the Finnish newspaper HS that they will be taken offline. Netflix did not explain how they ended up there to begin with.

DivX Finland member Jarmo Hakala tried to reach Netflix to discuss the use of “their” subtitles, but he has yet to receive a response from the company.

This is not the first time that fansubs have been controversially used in official programming. Last year footage from the dubbing room of the American anime distributor Funimation revealed how the company was also using ‘pirated’ subtitles.

Apparently some elements from this “pirate” subculture can also be of use to copyright holders, when it suits them.

Update: In a comment on the issue Netflix told TorrentFreak the following:

“We buy movies and TV shows from many different distributors. Generally they provide the subtitles. We’re investigating how these subtitles were added to Andromeda.”

“We have removed the series from Netflix pending the investigation. We are a legitimate service and pay a lot of money for the TV programs and movies on Netflix, including subtitles.”