In 2016, the European Commission announced plans to modernize EU copyright law, something that was to later develop into a worldwide controversy.

A major part of the proposal is Article 13, a text that aims to make online services liable for uploaded content unless they take “effective and proportionate” measures to prevent copyright infringements.

The implication is that platforms such as YouTube would be compelled to implement upload filtering and then proactively monitor to prevent future infringing uploads.

Back in June, the Legal Affairs Committee of the Parliament (JURI) adopted the proposals but a month later, following a plenary vote in the European Parliament, opposition mounted with 278 votes in favor and 318 against.

This somewhat unexpected turnaround meant that the proposed legislation was re-opened for amendments and a vote was scheduled for September 12th, just 15 days from today. With the date edging ever closer, groups and individuals on both sides of the debate have been drumming up support. A new campaign just launched by music industry groups in the UK is the latest addition.

“The UK music industry has united to call on EU Members of Parliament to secure music’s future,” the #LOVEMUSIC campaign site reads.

The heavyweights behind the campaign 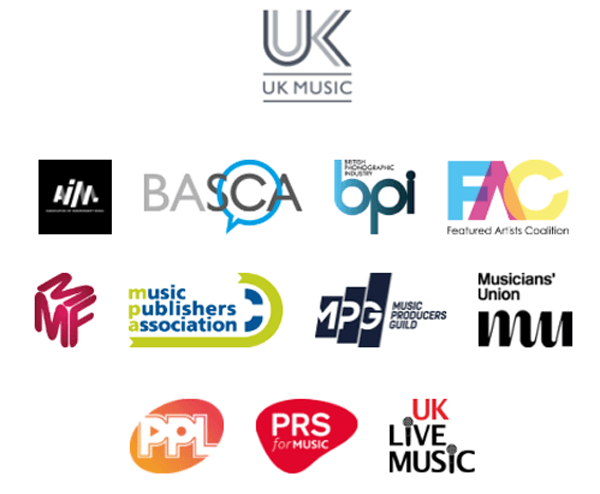 As the image above shows, the campaign has the support of some of the most powerful music groups in the UK, including the BPI, PRS For Music, and licensing group PPL. They’re singing with one voice in favor of Article 13 and against companies who they claim abuse artists’ rights.

“The creative industry is a vibrant ecosystem that supports many creators. Music creators are like butterflies in this rainforest – beautiful and delicate,” they write.

“Yet some of the global tech giants are laying waste to our creative world, threatening music’s vibrancy and diversity by not fairly compensating creators for the use of their work. Creators need protection or the world of music will suffer.”

The #LOVEMUSIC campaign site asks visitors to add their signature to the Make Internet Fair petition, which calls on EU decision-makers to recognize that “platforms like YouTube are involved in reproducing and making our works available under copyright laws” and ensure that the “safe harbor non-liability regime does not apply to them as it is meant for technical intermediaries only.”

While most protests are taking place on the Internet, the platform that will be most affected by Article 13, opponents of the proposed legislation have been urged to gather in public too. Julia Reda MEP previously published details of a day of action to take place yesterday in various locations around Europe, but that will be just the tip of the protest iceberg as September 12th draws closer.

Aside from the importance of the legislation itself, it will be intriguing to see how this new vote takes shape. Following their shock defeat in July, major players in the music industry called foul, claiming that the protests had been automated and organized by “big tech”, something addressed by Reda recently.

“They’re claiming the protest was all fake, generated by bots and orchestrated by big internet companies. According to them, Europeans don’t actually care about their freedom of expression,” she wrote.

“We don’t actually care about EU lawmaking enough to make our voices heard. We will just stand idly by as our internet is restricted to serve corporate interests.”

To prove these predictions wrong, one of the focal points of the ‘NO’ campaign is a Change.org petition. At the time of writing it has in excess of 951,000 signatories, with the million target probably just a few days away. 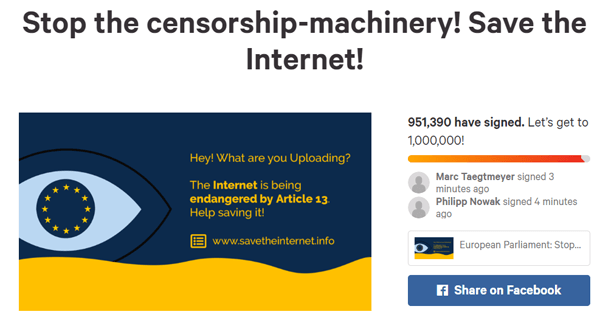 Also attracting eyeballs is the SavetheInternet portal, which provides detail on both Article 13 and Article 11, which is commonly referred to as the “link tax.”

While the music industry has mostly tried to avoid comparisons with the technology versus content industries battle that ignited over the failed SOPA legislation in 2012, it’s becoming increasingly difficult to ignore the similarities in respect of Article 13. On Twitter, in particular, the rhetoric has been particularly bitter, a situation that’s unlikely to improve any time soon.