New MPAA Pirate-Sniffing Canines, All the Way from Ireland 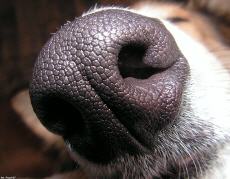 There have been many attempts at ending the flow of pirate media around the world but the introduction of sniffer dogs must rank up there with some of the most novel. Back in September 2006 the MPAA introduced a pair of black Labrador dogs, trained to sniff out pirate media. In fact the dogs were trained to recognize the aroma of polycarbonate – the material from which DVDs are made.

At the time, Dan Glickman, CEO of the MPAA explained: “Lucky and Flo have helped us prove that if we think outside of the box, we can find new and interesting ways to assist law enforcement and Customs officials around the world to stop illegal shipments of counterfeit DVDs from making their way across borders”

Indeed, Lucky and Flo enjoyed a great success(pdf) in March 2007 when they led authorities to seize 1,000,000 pirate DVDs, as part of ‘Operation Double Trouble’. It wasn’t long before there were reports that the syndicate whose DVD’s were seized weren’t happy – and they put a bounty on the heads of the black Labradors.

As the pair head home to the US, according to reports they are to be replaced by a fresh duo. Paddy and Manny are a pair of male Labradors from Ireland. One white, one black, they’re being trained by the same people who taught Lucky and Flo and should arrive for duty in Malaysia around February 2008

“Their training is almost completed,” said Nor Hayati Yahaya, a Malaysian representative of the Motion Picture Association. “Malaysia will be the first to have its own canine unit for sniffing optical discs” he added.

Just like their predecessors, Paddy and Manny are trained to detect polycarbonate from which DVDs are made. They are not able to tell the difference between pirate and legal discs but as pirate discs are often hidden in areas which are documented as containing other materials, the dogs are able to sniff out the rogue items.

Malaysia has quite a bad record for piracy and these DVD sniffing dogs have provided them with a couple of headline grabbing hauls which generate some much needed publicity for the authorities, desperate to be seen to be taking action against pirates. The MPA’s Nor Hayati claims that the use of these dogs by Malaysia shows a “huge difference in terms of attitude, commitment.”

Others might say it’s 10% effort with the dogs, and 90% commitment on the publicity drive. Image, they say, is everything.