The movie-oriented zButterfly BitTorrent client was released to the public a few days ago after being tested in a private beta for a few weeks. Published under a GNU general public license (GPL), the Open Source client is based on the well known Vuze code, but with some added features that make it stand out from the rest.

The main focus of the client is to make it easier for people to find the various movie releases on BitTorrent. On startup users see a home screen where the most popular movies are featured, and on the side they can navigate through the ‘catalog’ of films by genre, actors, directors, countries and the year the film was released.

In addition to a catalog browser there is also an advanced movie torrent search engine built into zButterfly. Here, users can filter their searches based on production years, genres and IMDb ratings. In total, there are over 8200 films for which at least one torrent is available, but Philip Lamb, Marketing Director of zButterfly, told TorrentFreak that the catalog will continue to expand. 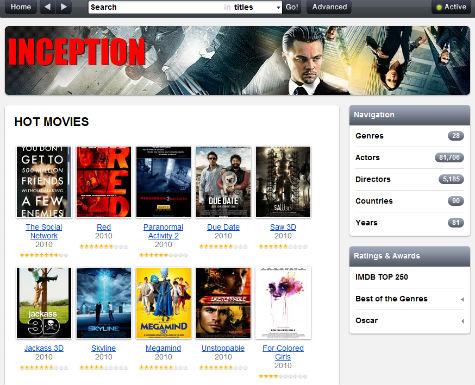 When users see a film they like they can continue to the movie download page where a wealth of information is presented. Various release formats, the film’s cast, its IMDb rating, trailers and recommendations for similar films are all available. Most of this meta-data seems to originate from IMDb. The actual downloads are torrentless, and rely solely on magnet links.

Although there is little doubt that there will be a subset of BitTorrent users who will be interested in using such a client, it is also a certainty that the MPAA will not be backing this project. zButterfly’s Philip Lamb agrees with this assessment but believes that they don’t do anything wrong.

“Trouble with the movie industry should be expected,” Lamb told us. “But legally we are a search engine. We do not copy the content on our servers, we do not operate a torrent tracker, we are just a mirror of the BitTorrent network. A mirror which is decorated with a catalog of movies.”

“All movies in our catalog were found with our automatic search robots. Any copyright holder may submit a request for removal, but there is no guarantee that the movie will not be added to our database in the future,” Lamb said, adding that search engines such as Google can also be used to find torrent files. “Legally we are not much different from Google.”

Up to a certain degree Lamb may be right. But judging from the movie industry’s lawsuits against torrent sites in the past years, we’ve learned that ‘intent’ is more important than technicalities. The MPAA would probably argue that zButterfly is promoting copyright infringement by featuring several blockbuster movies on their home screen.

The new client can be downloaded on the official site and all the project’s source files are available on Sourceforge.