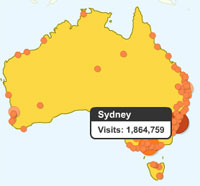 Nielsen, one of the largest market research companies worldwide is probably best known for their TV-show ratings in the US. However, they’re also looking into less old fashioned media outlets such as BitTorrent. Most recently, they say they have found an interesting trend in Australia.

“Total visits by Australians to BitTorrent websites including Mininova, The Pirate Bay, isoHunt, TorrentReactor and Torrentz grew from 785,000 in April last year to 1,049,000 in April this year, Nielsen says. This is a year-on-year increase of 33.6 percent,” The Age wrote a few days ago.

This may sound like a lot of traffic, but since Nielsen reports the number of visits and not the unique visitors we expected it to be much higher. Luckily, Mininova was kind enough to give us some insight into their statistics so we could check how accurate Nielsen’s estimates are. The results are quite a shock.

So, the Australian visitors to Mininova alone are already 600% higher than Nielsen’s estimates of the total traffic to Mininova, The Pirate Bay, isoHunt, TorrentReactor and Torrentz. Unfortunately we don’t have any details on the methodology or sample Nielsen used, but it’s certainly not very representative.

Perhaps even more worrying, The Age attributes the surge in traffic to the economic downturn, without providing any evidence for a causal relationship between the two events. Over the past 5 years most BitTorrent sites have seen huge traffic increases every year, also when the economy was in an upswing.

Even more so, the money generated by (legal and illegal) use of BitTorrent and other file-sharing networks is greater than the combined revenue of the various entertainment industry bodies who try to stop piracy. One could argue that without piracy the whole economy would collapse.

The downloading itself is not so much about cost saving. In Australia, BitTorrent is especially popular among those who want to catch up with US television shows that appear months or years later on TV down under. Money is not so much of an issue for them, they simply want to see the latest Lost or Heroes episodes.