The account that was used to upload the torrent, linked to in yesterday’s piece, was from a user called ‘NINofficial‘, and included a text about the release. Similar accounts, named NIN, appeared on the private music trackers what.cd and waffles.fm on Friday, and uploaded the same torrent.

Uploads to torrent sites, claiming to be from the owners of the material are not unheard of, but are also not common. When it has happened, it’s been to public sites, and generally a hoax, which makes people all the more wary when accounts appear, claiming to be ‘official’ or from the people behind it.

However, TorrentFreak has verified that the accounts in question, ‘NIN’ on both waffles and what, and ‘NINOfficial’ on The Pirate Bay, are indeed accounts belonging to the band’s representatives.

“last night our website had to go down for maintenance for a little while due to the incredible amount of traffic and downloads, and we linked directly to our Pirate Bay torrent as a way for people to get the music while we were offline.” Rob Sheridan, Art Director for NIN told TorrentFreak, adding “I noticed our official torrent of Ghosts I was in the top 10 of all torrents on The Pirate Bay last night.”

“We use torrents ourselves, and we know that most NIN fans are tech-savvy and familiar with file-sharing, so we want to experiment with ways to use that to our advantage, instead of making the mistake of trying to fight or ignore it, as so many artists and labels do.” NIN’s Rob Sheridan added. Many sites, too are willing to work with artists with programs such as Mininova’s content distribution platform and What.cd’s ‘Vanity House’.

It is not sure how NIN got invited to both OiNK replacements what.cd and waffles.fm, however, since Trent Reznor himself admitted to be a frequent user of OiNK, he probably signed up at the trackers from the start, and invited the official NIN user.

Of course, not everyone gets this, some news sites have been reporting that the accounts are bogus, or that the torrents, including the official ones, are stealing. An admin of one of the private tracker did have a sobering comment though “It doesn’t help that the full version is available as well on music torrent sites in general.”

screenshot of the official NIN profile at what.cd 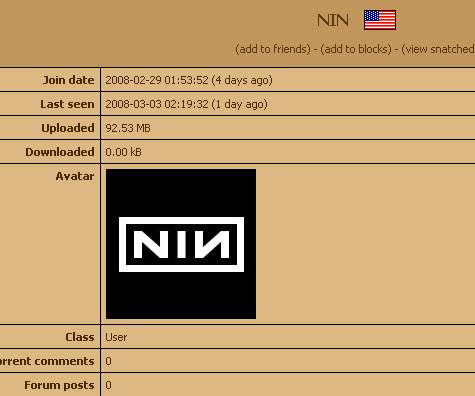