During the fall of 2007, tens of thousands of passionate music fans mourned the loss of the private music tracker OiNK.

One of the many avid users of the site was ‘WhatMan,’ who instead of crying in a corner decided to team up with others and build a new music tracker for all OiNK refugees.

“I felt sick to my stomach all morning,” WhatMan said at the time.

“We plan to grow into a large tracker – probably not as large as OiNK, and not as open, but eventually I would like to support at least a hundred thousand users,” he added.

This vision came to pass. Nine years later What.cd had more than 144,000 users, who together amassed 2,675,120 torrents, featuring 885,556 artists. Several users equated it to the Library of Alexandria for digital music.

Two weeks ago this library was burnt to the ground. French military police raided the site’s hosting company and took twelve servers, after which the What.cd team decided to pull the plug for good.

Over the years, What.cd’s music collection had outgrown that of its predecessor many times over but in a matter of a few hours, everything was gone. Or was it?

Soon after the shutdown, discussions began on other private trackers and elsewhere. Most people agreed that a new tracker should follow the path What.cd took nine years ago, and after the weekend was over, several alternatives were already up and running.

One of the new trackers is PassTheHeadphones (PTH), a name that’s obviously inspired by the PassThePopcorn site. As is often the case with private trackers, getting on board isn’t easy. At the time of writing the membership is capped at 10,000 users, but it’s expected that many more will follow.

According to one of the recruitment threads on a private tracker, the site is run by familiar faces in the community.

“Pass The Headphones is a new music tracker that aims to fill the void left in the wake of what.cd shutting down. Run by some familiar faces in the private tracker community, security is at the top of the list of priorities,” the message reads.

The rate at which PTH has been building its music library is impressive. The site is quickly closing in on its 200,000th torrent, which is the same number the original OiNK tracker had at its height. 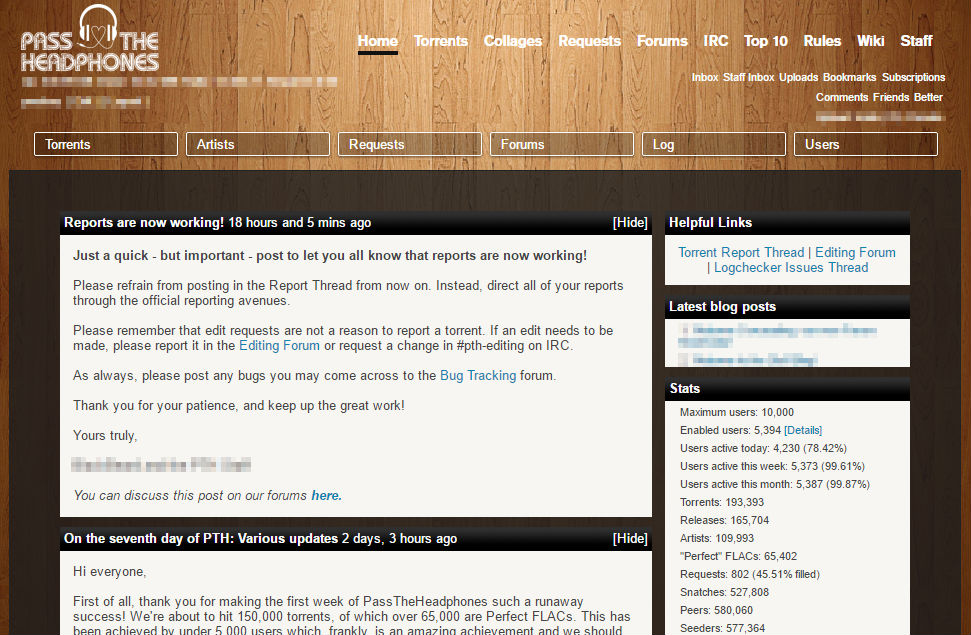 Another popular new tracker is Apollo, which was first launched with the name Xanax. This tracker has more users than PTH, but fewer torrents, at least when we last saw the stats.

Both PTH and Apollo run on the Gazelle tracker software, which was originally developed by the What.cd team. The same goes for other, smaller trackers that appeared recently, including the properly named NotWhat.cd tracker that surfaced a few days ago.

The NotWhat team says they’ve postponed their launch in order to beef up security. According to the site’s staff, security of the userbase and infrastructure is their top priority.

“The time has been spent securing the Gazelle codebase, securing the server infrastructure and minimizing personally identifiable information. NotWhat.cd DOES NOT store IRC IP logs, user access logs are wiped on a regular basis and our staff members are vetted, trusted members of the community,” they announced.

These precautions are not unwarranted and something NoStream.co, another aspiring What.cd replacement, learned the hard way.

This new tracker was compromised last week. All users were promoted to sysop and soon after emails of users started leaking online. As a result, Nostream was forced to throw in the towel after a few days (update: the new tracker nostre.am was launched recently, with the same owner and new staff).

While it’s too early to call winners or losers, it’s clear that history is repeating itself. You can shut down the largest digital music library in the world but as a result, several new ones have been created, which may grow to become even bigger than the original.

A few years ago WhatMan told TorrentFreak that he was happy to see other trackers using Gazelle. It seems fitting to repeat this as the final words today, to complete the circle.

“It gives me great pleasure to see other trackers running on our code. By releasing the Gazelle frontend and the Ocelot tracker, our goal was to make it easier for admins to run large sites and for users to download content,” WhatMan said at the time.