As one of the most iconic gaming manufacturers in the world, Nintendo has been fighting piracy for decades.

The company has an in-house anti-piracy division that signals the latest threats to steer enforcement actions in the right direction.

In recent years it’s gone after sites and stores that offer pirated games and has assisted in the criminal prosecution against alleged members of the hacking group Team-Xecutuer. However, the smaller fish are not being ignored either.

A few days ago, Nintendo’s legal department sent DMCA notices to the game publishing community Game Jolt. The site, where hobbyists and indie developers share their creations for free, was notified that hundreds of fangames infringed Nintendo’s trademarks. 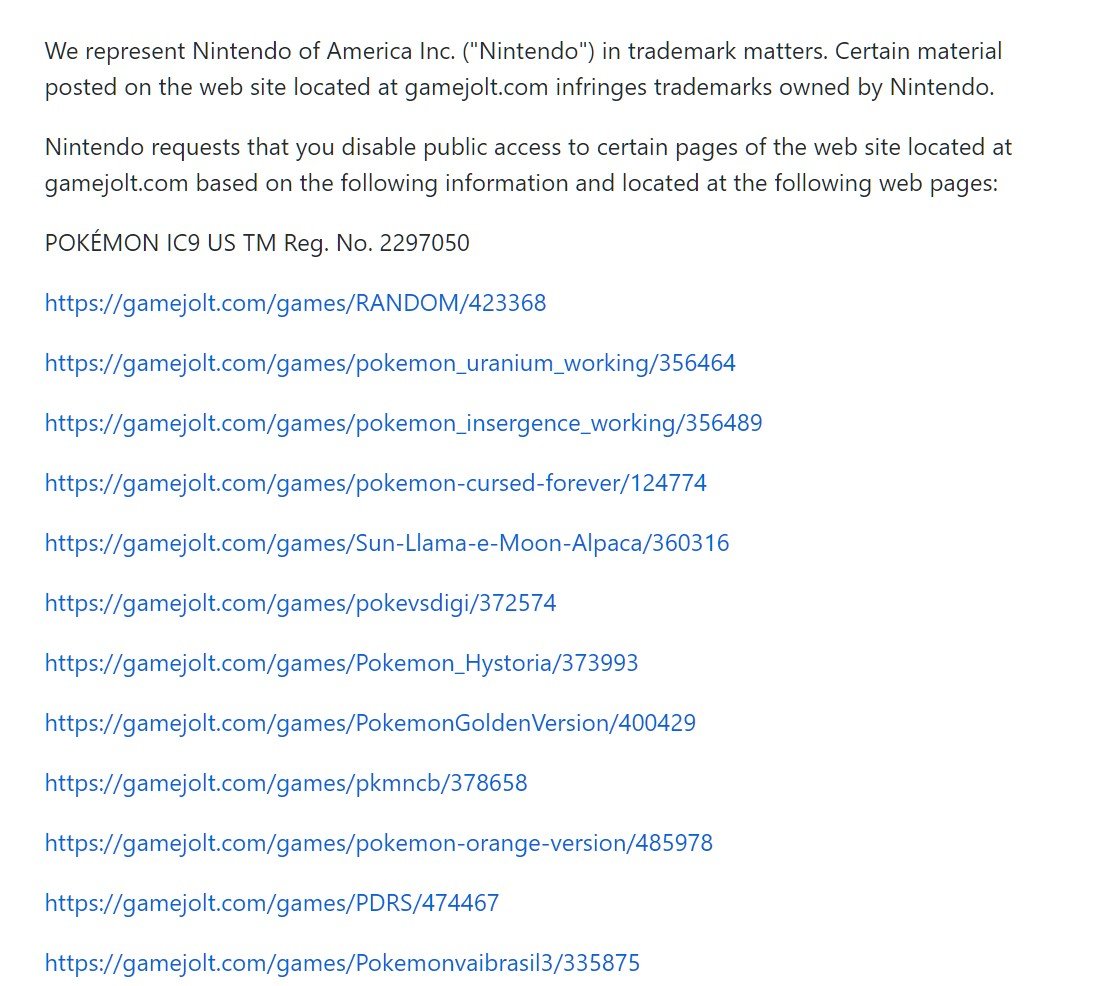 The takedown spree, which was published publicly by Game Jolt co-founder and CEO Yaprak DeCarmine, notes that the games in question use copies of Nintendo’s intellectual property without permission. Game Jolt allegedly profits from this.

“The web site at gamejolt.com generates revenue from advertising banners displayed on the site and advertisements played while users wait for the games to load,” the takedown notices add.

This certainly isn’t the first time that Nintendo has targeted fangames, but the scope of this recent effort is massive. In total, the two notices posted by Game Jolt target 379 game URLs, which were all taken down. Game over.

The developers of the games and many of their fans were taken by surprise. Players were suddenly greeted with a 404 error message like this one and developers received an alert notifying them that their game had been targeted.

The mass removal is a hot topic in the Game Jolt community. Many people don’t understand why Nintendo would target some of its most dedicated fans. That includes the indie developers who spent weeks or months on their projects.

No Sympathy for Nintendo

“They’ll get no sympathy from me, this isn’t the first time they’ve pulled a stunt like this. They’ve made it clear they hate their fans and repeat it time and time again never learning from it.”

The developer will continue to work on his “Five Nights At Team HQ series” but fears that it will be targeted eventually. That doesn’t stop the developer though, and he encourages others to simply flood the Internet with copies.

“Nintendo if you think taking down everyone’s games will help your image and get people to buy more of your games then you’re sorely mistaken! I’ll keep making and reuploading fan games even if you try to take them down, so DEAL WITH IT!

“All people who have copies of the fangames that were taken down take them and reupload them all over the internet so they stay up no matter what!”

Although some developers prefer to lie low and stay out of Nintendo’s hairs for the foreseeable future, some have indeed brought their games back to life. For example, ‘Jeb Yoshi’, the developer of “Five Nights at Yoshi’s,” re-uploaded it with ads disabled.

“After looking into it, I believe the fact there was profit being earned from advertisements on the game page was the reason for the takedown of this game among countless others,” the dev writes.

‘Jeb Yoshi’ refers to Nintendo’s mention of the advertising element in the DMCA takedown request, which is mentioned by other people as well. They are not sure whether that’s indeed the case though. “Let’s hope this goes well,” the dev wrote on Discord.

In pursuit of more clarity TorrentFreak reached out to Nintendo for a comment but, at the time of writing, we have yet to receive a response. We also reached out to Game Jolt to hear their thoughts on Nintendo’s DMCA requests but the company didn’t immediately reply.

We will update this article if more information becomes available.