Every month new pirate sites appear online, hoping to be the next big thing. Many fall by the wayside, having fizzled out in what is already an extremely crowded marketplace.

To gain traction, sites need to offer something different, either through innovation or by polishing existing experiences to stand out as a desirable alternative. Seemingly out of nowhere, movie and TV show streaming platform Nites.tv seemed to hit the bullseye recently by offering high-quality content with little fuss.

After registering its domain in the summer of 2019, Nites.tv was slow to get off the mark but starting October its traffic began loosely doubling every few weeks and by January 2020, according to SimilarWeb stats, was receiving around 350,000 visitors per month.

In overall terms, this isn’t huge amounts of traffic for a pirate streaming platform but there can be no doubt that, among its users, Nites.tv was considered a desirable platform. With a clean interface and large library of content, given more time it could have grown into something particularly notable. But then things began to get a little unusual. 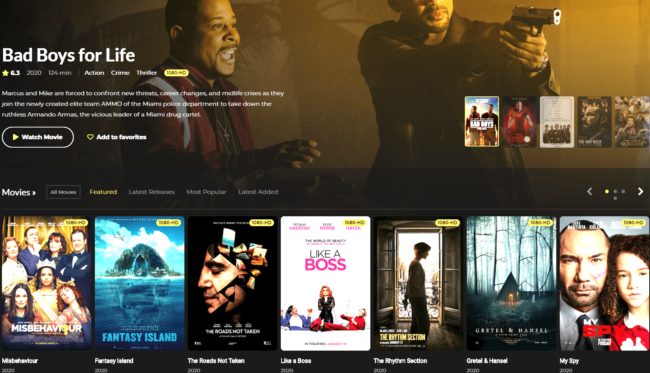 Around a week ago, a number of news sites around the world began publishing stories about Nites.tv. In the UK, for example, The Sun ran a feature on the platform, explaining what it offers and questioning whether it was legal or not.

While Nites.tv is clearly not legal, the fact that The Sun wrote about a relatively obscure site with no news angle whatsoever was unusual in itself but the publication did point to a large number of recommendations on social media in its opening paragraphs.

Over in Asia, an Indonesian news site also mentioned increased discussion about the site online and felt sufficiently curious to refer the matter to the country’s Ministry of Communication and Information Technology for comment.

The existence of Nites.tv also came to the attention of Israeli news publication Ynet, which reported that the streaming platform was being heavily promoted on social networks including Twitter and Whatsapp messages. According to the publication, the messages on Whatsapp were noticed by security company ESET, which issued a warning about not clicking random links in messages in case they carry something nefarious.

Ynet speculated that the interest in Nites.tv may have been boosted as a result of people sitting home bored due to the coronavirus and looking for something to watch. Supporting this theory, a Reddit user reported that a Facebook campaign promoting the site stated that “USA has made all this content free during lockdown”, which of course is absolute nonsense.

Then yesterday, completely out of the blue, visitors to Nites.tv were greeted with an unpleasant surprise. Instead of all the latest movies and TV shows available for immediate streaming in high-quality, they were presented with the familiar ‘seizure’ notice of the Alliance for Creativity and Entertainment (ACE), the global anti-piracy coalition that has taken down similar sites for breaches of copyright infringement.

This, of course, piqued our interest. We have covered dozens of these actions in the past and have become fairly familiar with how these things play out. Following a credible threat from ACE, sites tend to go dark for a while and then later, when some type of agreement has been reached with site operators, their domains are handed over to the Motion Picture Association (MPA).

Seized domains are subsequently redirected to the ACE anti-piracy portal but that traditional pattern doesn’t appear to have been replicated here.

We can’t rule out that ACE has filed a complaint against the site and it remains possible that the site owner responded immediately by voluntarily redirecting his domains (nites.tv, nites.cz, nites.ac) to the ACE portal. However, the owners of the domains aren’t currently listed as the MPA (as they mostly are) and their nameservers remain with Cloudflare, not the nameservers operated by the MPA that usually serve seized domains.

That leads us to another piece of the puzzle. Yesterday, around the time the Nites domains began redirecting to ACE, the official Nites Twitter account put up a poll, requesting feedback from site users as to how the platform should operate moving forward. 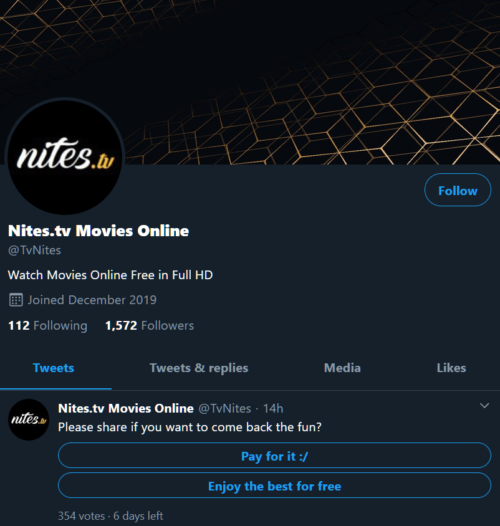 As things stand, very little of the above seems normal. The media attention isn’t in proportion to the size of the site and a pirate site campaign on WhatsApp is almost unheard of. Furthermore, the ‘seizure’ indicators don’t add up either, especially when combined with an immediate user outreach to determine where the site goes next.

One to watch from a distance perhaps, at least for now.

“We take copyright violations very seriously and will vigorously protect the rights of legal copyright owners. For that we decided to shut down our services. We are working on other ways to show you good content in a legal way,” the platform announced.