No Fools: 300 Feds Wipe Out 50% Of US Music Piracy Overnight

In common with many in his line of work, Jack Francis, a New York-based investigator with the RIAA, says that music from pirate sources is causing a huge problem for the industry. Unofficial sources are cutting up the market with cheap prices, says Francis, “..and there’s no way a legitimate business can compete with that.”

Francis and his colleagues at the RIAA are deeply critical of the continuing rise of music piracy, something which has been getting progressively easier with new technology.

“Ten years ago piracy wasn’t a big problem,” explains Stephen Neary of IFPI. But now that people are starting to get equipment capable of recording music at home, he worries, the difficulties are escalating.

“We call it the rape of our tape,” says Neary.

A spokesman for Capitol Records supports the RIAA and agrees that with the advent of cheaper and better equipment, things are getting worse in the United States. The evidence can be seen in the grim picture below. 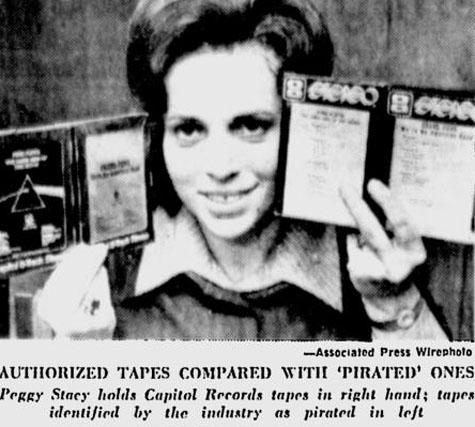 “This is something I have seen and known about and lived with for 20 years. It has to be stopped,” said rising country music star Johnny Cash. “I’m concerned with the moral issue here. Record piracy is no better than counterfeiting $100 bills….or rustling cattle.”

Cash’s paymasters in the country music industry agree that the solution definitely lies in the toughing up of legislation. Following a period of lax legislation, recently Tennessee became the first state where the piracy of music became a felony and now there are nearly eight others.

Penalties are getting harsher too and now range from $100 to $5,000 but according to the industry, that’s not enough. Indeed, Cash has been publicly supporting a bill by two congressmen that would impose fines of $50,000 and jail terms of up to 3 years for music piracy. But not everyone is happy with the approach.

“These proposed fines are absolutely crippling and a totally over the top reaction,” said a spokesman for TapeFreak, a small newspaper that reports on music piracy issues.

“In 30 to 40 years people will look back on these fines and wonder why there wasn’t more public outrage. If people don’t speak out now who knows where we will end up.” 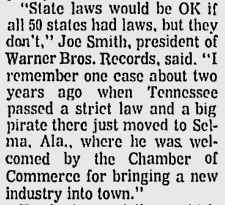 But it seems that harsher fines in one area simply causes a relocation of the problem. According to Joe Smith, President of Warner Bros, when certain states adopt tougher penalties, pirates simply move to another.

“State laws would be OK if all 50 states had laws, but they don’t,” says Smith. “I remember one case about two years ago when Tennessee passed a strict law and a big pirate there just moved to Selma, Al., where he was welcomed by the Chamber of Commerce for bringing a new industry into town.”

TapeFreak’s spokesman says that legislation isn’t the answer and that pirates will always find a way to continue – particularly if they get access to new technology.

“I know it sounds unlikely but what if in the future pirates find a way to duplicate music at negligible costs, maybe by making tapes spin round more quickly? The problem could escalate overnight and who knows what might come along next,” he said.

But the problem isn’t only making the copies. TapeFreak says there’s a real possibility that the postal service will get their act together in the next few years and become really efficient with their deliveries. Once tapes can be shipped around in double quick time – perhaps even further afield outside the US – the problem might not remain localized. It could even become a worldwide issue.

“What is the music industry going to do then – open every package and envelope and look inside? I don’t think so. It would take too much time and besides, people would go crazy,” he added.

Stephen Neary of IFPI maintains that the solution to these possible but unlikely future events lies in legislation. To this end his organization is waging a worldwide campaign to persuade governments to introduce and enforce tougher copyright laws. He held up Hong Kong as a shining example of what could be done and told the Sarasota Herald Tribune that “you’d be very lucky” to find pirated music there. 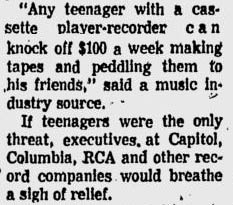 While tackling large scale pirates is one thing, going after individuals is something else altogether. A spokesman from Capitol Records is pessimistic.

“You’re never likely to stop the little guy,” he explained. “Just like they never stopped people making bootleg liquor in their bathtubs.”

However, if teenagers in bedrooms were the only threat, executives at Capitol, Columbia, RCA and other record companies would breathe a sigh of relief. They have bigger fish to catch and are making significant progress in doing so.

As this article was going to press, it became apparent that the United States government had incredible news for the music industry following their intense lobbying efforts. According to yesterday’s article in the New York Times – dated 7th December 1978 – more than 300 FBI agents have seized $100 million worth of modern sound-recording equipment.

Officials said the raids “wiped out 50 percent” of the illicit recording industry in the United States, which is obviously very encouraging news. Considering the industry’s moves to have harsh legislation put in place in all 50 states, it must follow that getting rid of the remaining 50% is just a raid or two away.

Couple this with a replication of IFPI’s Hong Kong successes in other countries around the world and music piracy will almost certainly become a thing of the past, probably in a matter of a few years.

Of course, there’s always the possibility that some new newfangled device will come along to stir things up, but rest assured, the music industry are no fools. They won’t be fighting this war in another 30 years.

The law will see to that.

Comments from TapeFreak aside (forgive us a little artistic license), every person, every event and every quote referred to in this article is entirely genuine. The story was compiled from real news reports from real newspapers during the 1970’s, as indexed by Google’s wonderful archive service. Just a few of this article’s sources can be found here, here, here, here and here.