Despite the growing availability of legal options, online piracy remains rampant. Every day pirate sites and services are used by millions of people worldwide.

In fact, traffic to these sites is booming. During the first eight months of 2022, pirate site visits increased by more than 20% compared to the same period a year earlier, which is good for a dazzling 141.7 billion visits.

Nearly half of this traffic (47%) goes to TV-related content. The publishing category takes the second spot with 28 percent, followed by the film (12%), music (7%), and software (6%) categories.

The traffic increase is noticeable across all types of piracy but the film category stands out. Compared to the year before, the number of visits has grown by nearly fifty percent.

This jump in film piracy may have been exacerbated by the Covid pandemic, as many releases were held back or delayed the year before.

Looking at the relative change in the other categories, shown in the bar chart below, we see that publishing piracy also grew by more than a third. The remainder of the categories show relatively modest increases, with music barely showing any increase. 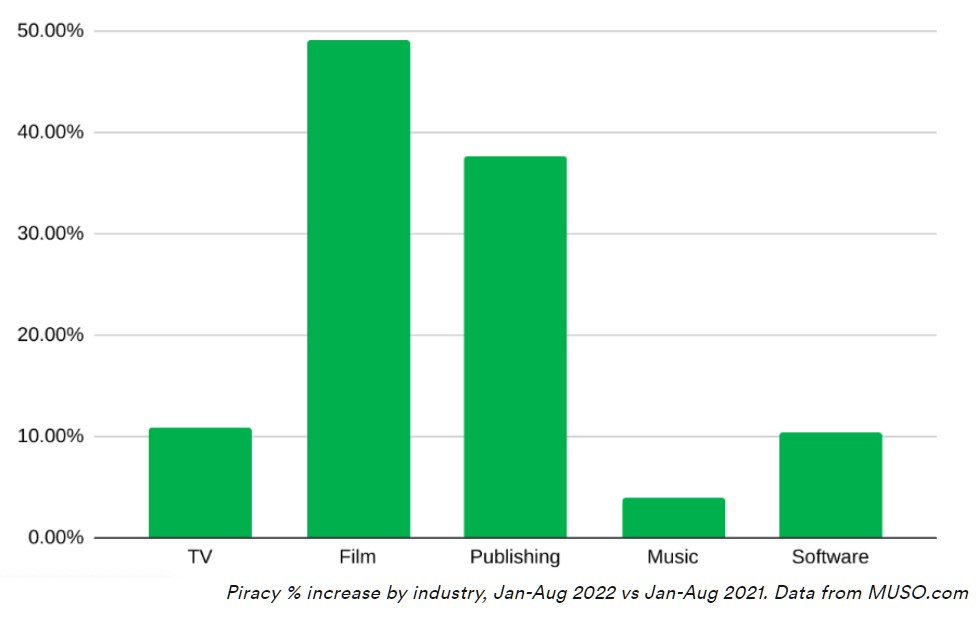 Muso separates piracy into streaming and download categories, with torrent sites and cyberlockers occupying the latter. This leads to some obvious conclusions. For example, pirates don’t stream software and books.

However, we also see that TV piracy is now dominated by streaming piracy, which accounts for more than 95% of the traffic in this category. For films, streaming sites are in the lead as well (55%) but download sites remain often used (45%) too. 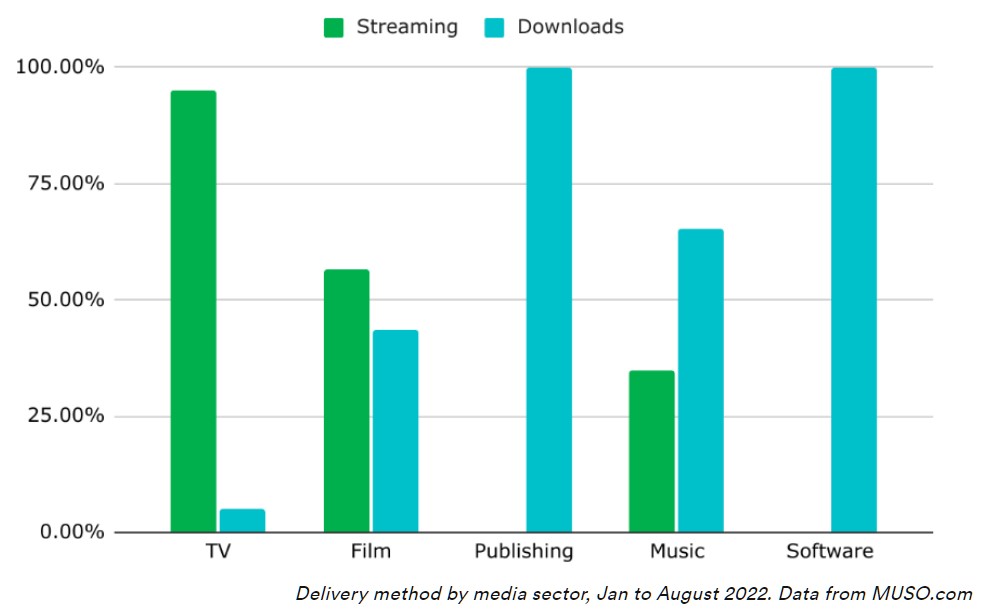 Finally, the geographical distribution shows a familiar picture. The United States is firmly in the lead as the country that sends most visitors to pirate sites. Muso clocked 15.5 billion visits, which is more than 10 percent of the global piracy audience.

Russia and India follow at a respectable distance with around 8 billion pirate site visits, followed by China and France, with 4.7 and 4.6 billion visits, respectively.

These country rankings are more or less on par with previous years, with the top three remaining unchanged. This isn’t a major surprise as these countries are also among the largest in population size, with access to the Internet.

While these trends are intriguing to follow, it should be noted that the numbers only apply to regular pirate sites visits. This means that a large and growing part of the piracy ecosystem, including dedicated piracy boxes and illegal IPTV offerings, are not included.

All in all it appears that piracy has continued to grow over the past two years. That follows a period in the late 2010s when visits to pirate sites declined in some regions.