Over the years BitTorrent has become fairly mainstream, with hundreds of millions of people using torrent clients to download the latest entertainment.

Despite its popularity the downloading process can be cumbersome at times, especially for novices. Faced with this challenge Sebastian, a designer from Buenos Aires, Argentina, decided to come up with a piece of software that would make the process as easy as Netflix.

“As a designer I love the challenge of simplification. Take something hard for the common user and make it usable. I have a lot of friends who don’t understand torrents and I wanted to make it easy and effortless to use torrent technology,” Sebastian tells us.

A few months of coding later “Popcorn Time” was born, a tool that allows users to stream popular movie torrents with the click of a button. Popcorn Time offers instant access to hundreds of films, in various qualities and complete with subtitles if needed. 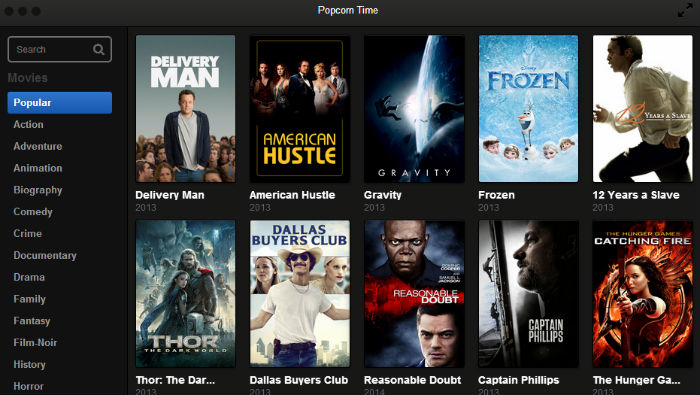 What started out as an experiment for a group of friends soon developed into something much bigger. Popcorn Time now has 20 collaborators on Github and continues to expand at a rapid pace. Developers from all over the world have added new features and within 24 hours it was translated into six languages.

Sebastian explains that Popcorn Time uses node-webkit and is available for Windows, Mac and Linux. It’s basically a browser that users HTML, CSS and JavaScript to serve the movie streams.

“The technology behind the app is very simple. We consume a group of APIs, one for the torrents, another for the movie info, and another for the poster. We also have an API for the subtitles. Everything is automated, we don’t host anything, but take existing information and put it together,” Sebastian says

The torrent files all come from YTS (formerly YIFY), which has an API Popcorn Time taps into. The application can search this database and allows users to stream the torrent on demand. When finished the app will continue to share for a while after the download is finished, to avoid leeching.

Since Popcorn Time links to a lot of copyrighted movies, Hollywood is not going to be happy, but according to Sebastian the developers don’t expect any legal issues. They inform users that sharing copyrighted material is not allowed everywhere, and other than that they are just repackaging existing content, without a commercial angle.

“We don’t expect legal issues. We don’t host anything, and none of the developers makes any money. There are no ads, no premium accounts, and no subscription fees or anything like that. It’s an experiment to learn and share,” Sebastian notes.

All the people who work on the project are big movie fans themselves, and most have Netflix accounts. Sebastian believes that going to the cinema is the best way to experience a movie, but if people who want to enjoy a recent film at home they should be able to do so. This is often not the case, and that’s where Popcorn Time comes in.

“We hate that we don’t have the chance to watch some movies at home. Popcorn Time is an experiment to show that you can do something better for the users, and that you can do it with BitTorrent,” Sebastian says.

Popcorn Time is officially still in Beta, and will continue to improve in the weeks and month to come. However, one thing will never change, it will remain free and open source for as long as it exists.