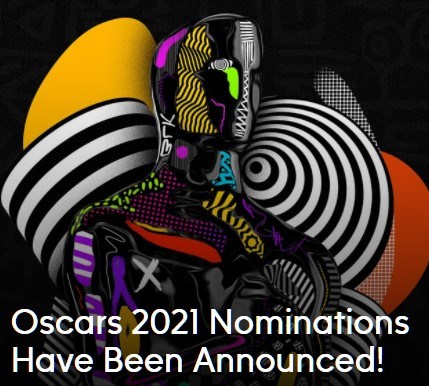 In two weeks, the 93rd Academy Awards ceremony is scheduled to take place in Los Angeles.

The Oscars are the most prestigious film awards and millions of movie fans are looking forward to seeing what this year’s “Best Picture” will be.

Fans had to be patient as the official ceremony was delayed by a few weeks due to the ongoing coronavirus pandemic.

That’s not the only thing that changed. The legal availability of many top contenders, including Nomadland, is also lacking in several countries. That’s the result of closed theaters and slow digital releases.

A few weeks ago UK piracy tracking firm MUSO warned that the unavailability of these movies could trigger a piracy boom. The piracy numbers for Oscar winners tend to shoot up every year. When these films can’t be accessed legally, this will only be worse.

With this in mind, we certainly plan to take a closer look at how the upcoming winners will ‘perform’ on pirate sites. That said, could it be that the nominations themselves have had an effect already?

To research this we looked at a sample of torrent downloads of the Best Picture nominees “Nomadland” and “Judas and the Black Messiah”. The timeframe starts March 5th, ten days before the nominations were announced, and ends ten days after, March 25th.

Generally speaking, pirated movie downloads will vary quite a bit throughout the week, usually peaking on the weekend. While the nominations were announced on a Monday, we decided to add the non-Oscar contender “Honest Thief” as a control.

The results in the graph below clearly show that the downloads for both Oscar contenders peaked after the nominations were announced. Meanwhile, there is no significant change in downloads for “Honest Thief,” which even appeared to dip a little bit. 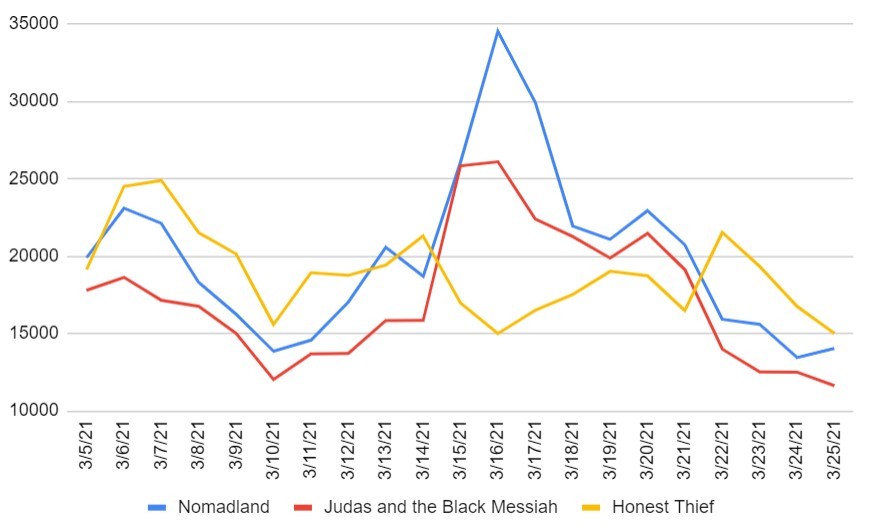 Percentage-wise, the nomination boost is obvious as well. On the day after the nominations, “Nomadland” downloads were 213% higher than the week before. A week later, these had dropped by more than 50% again.

A similar pattern can be seen for “Judas and the Black Messiah” which saw a 74% increase compared to the week before, to then drop by more than 50% a week later.

It is worth noting that pirated copies of all these films were available in a high-quality format during the entire period, so that didn’t impact the results in any way.

The only logical conclusion is that Oscar nominations act as a promotion. This drives legal consumption but also piracy. With that in mind, the rightsholders would be wise to make sure that their content is available legally when the winners are announced.

Note: The data used in this article comes from Iknow, which tracks torrent downloads through DHT and PEX. While it may not be able to track all downloads, it’s a substantial sample, which acts as a good proxy for the overall interest on all pirate sites and services.

It is worth stressing that this sample only looks at torrent downloads. Views on streaming platforms, direct downloads, and other piracy sources can’t be measured directly. That said, we assume that the trend will be similar there.

The Oscars Will Boost Piracy, Especially Without Legal Options