Waxy’s Andy Baio has been collecting detailed piracy stats for every Oscar-nominated movie since 2003. Much to the delight of the MPAA, his most recent statistics show that, compared to previous years, fewer Oscar nominees have leaked online.

The statistics for all 2010 nominees, except documentary and foreign films, show that 27 of the 34 films were available on BitTorrent in DVD quality last night. Nearly half of the films have leaked as a screener and 10 of those are estimated to be leaked by Academy members.

Although the majority of the Oscar nominees are available online, the movie industry has certainly scored a small victory. Last year all films leaked in one format or another. On another positive note for the MPAA, the median time for films to leak after their US-release date has nearly doubled to 21 days. In 2003 it took only one day for most films to leak onto the Internet.

On the negative side, there were still 4 films that were available online before they they premiered in US movie theaters. In The Loop, The Hurt Locker, The White Ribbon and The Young Victoria all leaked in advance of their official premiere. 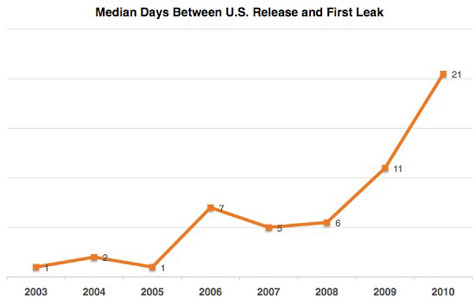 The graph below further shows that there are less retail DVD rips available compared to previous years, 44% versus 100% in 2008 and the years before. As Andy also mentions, this figure may go up a little before the official Oscar award ceremony broadcast. 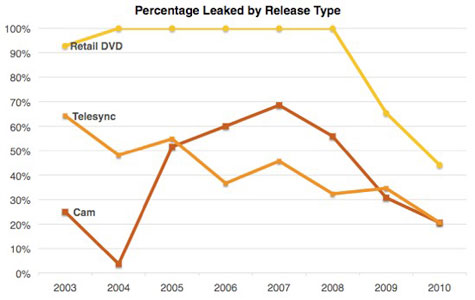 Although this data suggests that the movie industry is becoming more effective in preventing screeners from leaking online, we have to emphasize that more than a third of the leaks originated from deviant Academy members who like to share the work of their colleagues.

The Oscar screener of Avatar was sent out relatively late, only a few weeks ago. It leaked onto the Internet today and is not included in the graphs above.

Hive-CM8 is Looking For Frozen 2 and Star Wars Screeners