Research by Raynor Vliegendhart of the Tribler P2P team at Delft University of Technology has shown that BitTorrent is more vulnerable to a global collapse than anyone has ever predicted. By collecting statistics of a sample of 283,032 torrents with 52,634,797 connected peers, he found that over 50% of all torrents were tracked by The Pirate Bay.

In order to get an accurate estimate of the tracker load a single person connected to three torrents is counted as three peers. In the picture below, we see that roughly 5 million peers are connected to a torrent that uses only The Pirate Bay (single). Another 5 million have more trackers in the announce list, but use The Pirate Bay as the primary tracker. For the remaining torrents The Pirate Bay was added as an additional (foreign) tracker. 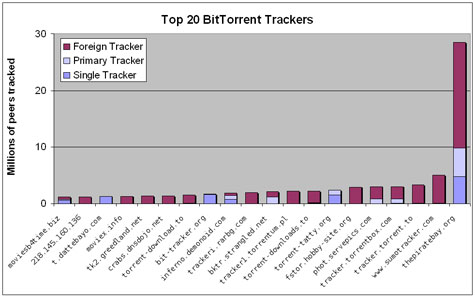 The Pirate Bay is by far the largest BitTorrent tracker, followed at a distance by Sumotracker, Torrent.to and Torrentbox respectively. Unfortunately, this dominant position can result in a horror scenario if the Pirate Bay tracker fails.

So what’s the alternative? How can we fix this vulnerability? The obvious option is to rely less on the Pirate Bay’s trackers, but this is easier said than done. Although there are thousands of smaller trackers on the Internet, it has proven to be hard to convince people to actually use these.

Perhaps we should find an alternative for the traditional BitTorrent tracker then? A truly decentralized form of filesharing, that doesn’t rely on the philanthropy of three Swedish guys? Attempts have been made to decentralize trackers, and most of the major BitTorrent clients support “trackerless” torrents through DHT.

DHT is not the silver bullet though, as it is lacking in speed and efficiency according to Tribler founder Johan Pouwelse, and the mainline Bittorrent client “has a faulty DHT implementation and many people will be left in the cold”. Researchers of Tribler found several DHT flaws. One bug in a DHT sorting routine ensures that it can only “stumble upon success”, meaning torrent downloads will not start in seconds or minutes if Pirate Bay goes down in flames.

“The DHT concept is proven to be broken and just invites DDoS attacks,” Pouwelse added. “People have proposed repairs to the DHT, but only at the cost of too much performance or global trusted servers.”

Dr. Pouwelse says that there have been ideas to deal with BitTorrent’s Achilles’ heel, but none of these have materialized. This summer Raynor hopes to have an operational solution in their Tribler BitTorrent client. They think the trick is to include the SQLite database engine in every Tribler client. This enables abuse prevention and fast starts, however this complex task could be delayed until Christmas (of some year to come).

So is BitTorrent going to die? No, not by a long shot. However, this research does point out that the ecosystem depends on The Pirate Bay. If their trackers go down for whatever reason, others are likely to collapse because of the increasing load and many torrent download will slow down significantly or stop entirely. So please direct your prayers to trackers around the world. May they function in peace and prosperity.

There are 97 comments. Add yours?