With over 1250 free WiFi access points across the US, Panera Bread is offering a much appreciated service to its customers. Tens of thousands of people use their free wireless Internet every day, and the company even lists it as one of their selling points on their website.

“Send an email as you munch a warm bagel. Read the news as you sip a latte. It’s a nice alternative to the office, isn’t it?” they write.

Well, not if you’re writing for TorrentFreak since our site is blocked, and we’re not the only site affected. The uTorrent website is also inaccessible, as well as the Wikipedia entry for BitTorrent and even Legaltorrents. Vuze.com on the other hand is not blocked. It all seems to be a bit arbitrary.

For some reason TorrentFreak is blocked by many web-filters. In the past we’ve contacted a university that decided to block us and asked the person responsible for the filter for an explanation. We were told that our site was wrongfully categorized as a hacking/warez site, and the university was kind enough to take us off their ban list. However, the issues with Panera Bread are a little different.

TorrentFreak is not allowed by Panera Bread 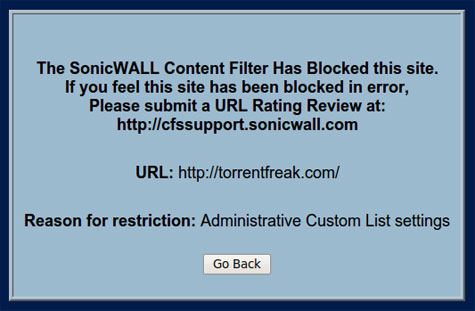 Panera Bread uses SonicWALL‘s filtering solutions and when running a check on their database we see that (unlike others) TorrentFreak is correctly labeled as a “news and media” website. So, the people at Panera Bread either added TorrentFreak to their custom ban list, or implemented a keyword filter which is also supported by the SonicWALL system.

Could it be that they block all sites with the keyword ‘torrent’ in the url? It’s beginning to look like that is indeed the case. All Google searches with the word ‘torrent’ in it are blocked by Panera Bread and it is impossible to download any .torrent files. Linuxtracker is not blocked, however, the torrent listing on the site (with the word torrent in the url) is again inaccessible.

It turns out that every website with ‘torrent’ in the url is blocked, the “reason for restriction” always being “Administrative Custom List settings”. It gets even worse though. A quick search on Amazon for (legal) products that have “torrent” in the URL results in yet another list on accessible pages.

* The LEGO toy of the Torrent spaceship from Star Wars.
* A backpack named “High Sierra Torrent 70 Hydration Pack.”
* Book author “Ann Torrent” wont sell anything through Panera Bread.
* And a whole list of book titles that include the word “torrent.”

Of course we fully understand that Panera doesn’t want users of their free WiFi hotspots to download massive amounts of data with BitTorrent, and since it’s their network they can impose as many restrictions as they like. However, there must be a more sophisticated method to achieve their goals than to ban everything ‘torrent’, including the dictionary entry.