On the occasion of its 10th anniversary last Saturday, The Pirate Bay shared a gift with its users – the PirateBrowser.

Faced with ISP blockades all over the world, The Pirate Bay is arguably the most censored website on the Internet. The PirateBrowser software allows people to bypass these restrictions, using the Tor network to obfuscate people’s locations.

Unlike the Tor browser, PirateBrowser does not provide full anonymity. It’s only meant to unblock The Pirate Bay in regions where it’s censored, which is good enough for most users of the site. Downloads of the tool are going through the roof.

The Pirate Bay team informs TorrentFreak that the PirateBrowser notched up its 500,000th download earlier this week. At the time of publication it has surpassed 550,000 with no signs of a decline in interest.

Aside from the impressive download figures, the browser was also repeatedly linked to another news event this week.

Around the same time the PirateBrowser was launched, the number of users on the Tor network started to grow rapidly. Tor project leader Roger Dingledine mentioned the spike on the Tor email list, hinting that PirateBrowser may have something to do with it. 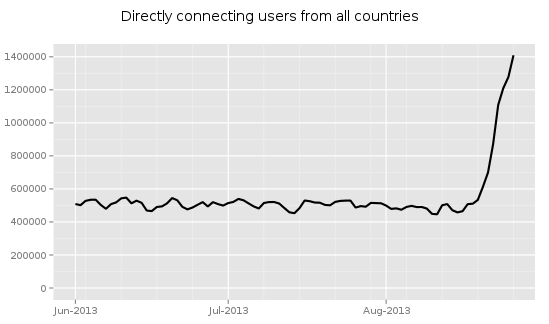 While it is a coincidence that PirateBrowser was launched around the same time the growth started, it seems unlikely that the two events are related.

First of all, the number of daily Tor users increased by more than 800,000, which is far more than the total number of downloads of PirateBrowser thus far. In addition, looking more closely at the increase in Tor users we see that the spike started August 19, more than a week after PirateBrowser launched.

Finally, the country specific Tor usage shows that the increase is most pronounced in South America. In Argentina and Brazil for example, where The Pirate Bay isn’t censored, Tor usage increased by more than 1000%. In the UK and the Netherlands, where blocks are in place, we only see a “modest” doubling in Tor users. 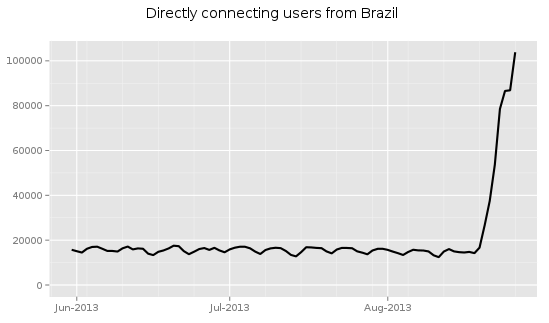 From the above it is safe to conclude that given that there was no significant Tor related news on the 19th, the most likely explanation is that the growth is unnatural. Perhaps a Botnet might explain it?

While PirateBrowser may not be responsible for the increase in Tor users, the half million download milestone is no less impressive. The Pirate Bay team informs TorrentFreak that they will continue developing the browser and Mac and Linux versions will be out later this year.

At the same time The Pirate Bay continues development on another anti-censorship tool, one that is destined to have an even bigger impact. They are working on a special BitTorrent-powered application, which lets users store and distribute The Pirate Bay and other websites on their own computers, making it impossible for third parties to block them.

This new tool should be able to keep The Pirate Bay operational, even if the site itself is pulled offline.