As reported earlier today, during today’s court session, social media came alive as prosecutor Håkan Roswall did a tedious presentation of the history of the tracker, various companies, revenue streams, ad sales and how he will “prove” it is all connected.

It was remarkable to see how thousands of people were following and contributing to an ongoing stream of information on the Internet. Through live blogs (in Swedish and translated), Twitter, live audio from inside the court and live video from outside, the coverage was massive.

The hash tag #spectrial was the most searched term on Twitter, The Pirate Party’s servers went down and it was nearly impossible to get access to trial.thepiratebay.org, which collects the various streams of information.

One of the defendants even contributed, as Peter Sunde (aka brokep) wrote on Twitter: “Might this be the first twitter from within a court case? It must be a #spectrial.” This might indeed be one of the first tweets from a defendant in court.

As the court went in recess for lunch, the gathering outside grew, in spite of the cold February day in Stockholm. Pirate Party flags marked the street corner, a band played and candy was handed to passers-by while being told that “sharing is caring”.

Pirate Music Outside the Court 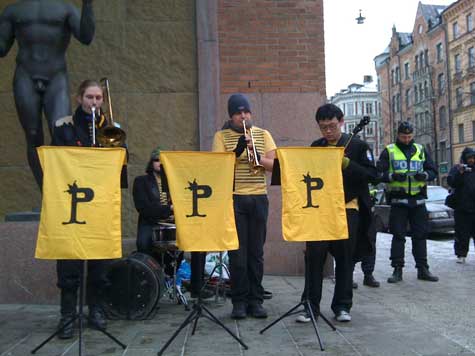 In the crowd we found Christian Engström, Vice Chairman of the Swedish Pirate Party who are currently heading towards getting seats in the European Parliament in June’s elections.

“This is a political trial,” he told TorrentFreak. “Firstly, the trial itself is political because the prosecutor wrote a memo in 2005 and said that it wasn’t possible to prosecute from the evidence. This trial only occurs because of political pressure from the United States on the then Minister of Justice.”

The trial, as Engström explains, is more than just a prosecution of The Pirate Bay. It is a question of the future of communication.

“Should the Internet be a place where everyone can communicate or should it not? That’s the question of this trial, and no court can answer that question. Even if The Pirate Bay would be freed all the way through the court system, the problem isn’t solved. The Copyright Lobby will demand more restrictions and tougher laws and the only way to protect social media culture in the long run is to work politically.” 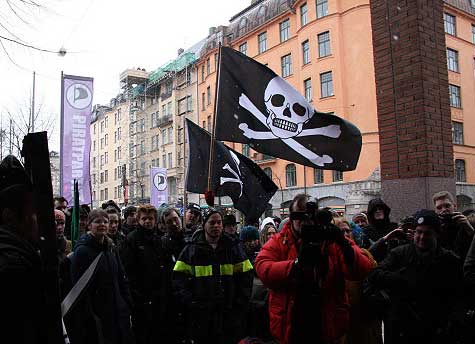 When asked if the trial had any significance at all, Engström told TorrenFreak that he finds it incredibly fun as a spectacle.

“Hollywood knows how to stage a show, I’ve got to hand them the credit for that. And I think that’s very positive because it means that for the following weeks, there will be lots of media focus on these important issues.”

After the lunch break, the proceedings continued as well as the coverage online. On Twitter Sofia did an outstanding job translating the audio feed into English, but she was just one of many. It is truly remarkable how many people committed themselves to covering the trial. For now we still live in a society where information is open and free.