In the summer of 2018, a report from anti-piracy company Irdeto examined the payment processing abilities of 400 pirate IPTV supplier sites. It found that the majority (76%) openly advertised their payment options with Visa, Mastercard and PayPal leading the way.

The strong message from Irdeto was that such payment processors should be supporting legitimate media organizations by conducting better due diligence and stopping support for pirate streaming services.

“If media organizations threaten to vote with their feet against payment platforms that enable piracy, it’ll be fascinating to see who blinks first,” the report said.

At the time we wondered whether this type of threat was the best way to achieve change. Now, more than two years later, the tone appears to have softened somewhat while still carrying a serious message.

While sporting a lower public profile than the Alliance for Creativity and Entertainment, there can be no doubt that the Audiovisual Anti-Piracy Alliance is a force to be reckoned with. The anti-piracy group currently has 30 members including tech companies Irdeto and Nagra plus content owners and broadcasters such as BT, BeiN Sports, DAZN, LaLiga, Premier League and Sky.

This week the group again raised the issue of payment processor support for pirate IPTV providers but framed things a little differently. According to AAPA, among other things the inclusion of payment processor logos on payment portals gives them an air of legitimacy while damaging the processors’ brands.

“From a pirate’s perspective, they want consumers to pay for the services they offer. Their professional-looking websites already fool many unsuspecting consumers into thinking that they are a legitimate vendor. This veneer of authenticity is further enhanced with pirates often using multiple well-known payment provider services to make it easier for subscriptions to be purchased,” the AAPA reports.

The underlying suggestion is that the appearance of brands such as Visa and Mastercard enables not only the processing of payments but also leads to a boost in consumer trust for illegal services. The big question then is how the situation has changed since the 2018 Irdeto report.

Improvement Over 2018 But Not Enough, Says AAPA

In 2018, of the sites that openly published payment methods, 21% offered Visa, 21% offered Mastercard, and 14% offered payment via PayPal. Since then, AAPA says it has engaged with all three companies and according to a study by its Disruption Working Group, PayPal now ranks first with 17.3%, Mastercard at 14.7% and Visa closely behind with 14.1%. 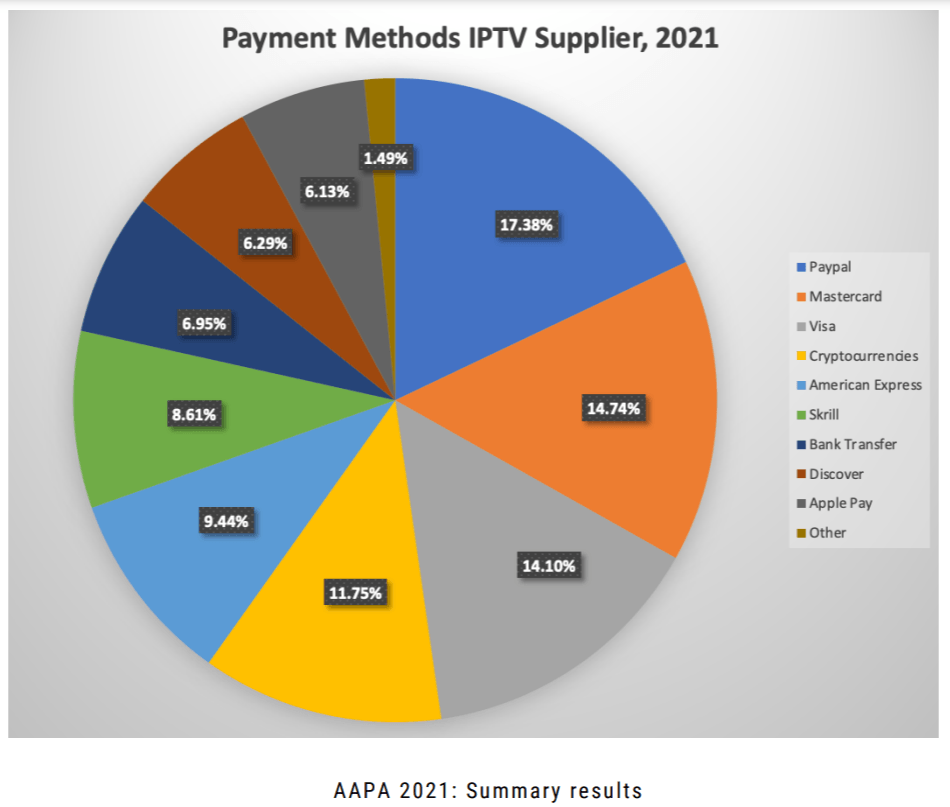 “The question for the payment services industry and policymakers is how do so many sites slip through the net of the preventive measures – some of which are legal requirements like anti-money laundering regulations? Of course, any ex-ante system is not watertight and can be circumvented but the evidence does suggest a lot more needs to be done. But by whom?” AAPA asks.

AAPA Engagement With The ‘Big Three’

Despite PayPal now being the largest player in the IPTV market according to AAPA’s own study, the anti-piracy group expresses no criticism for the payment processor.

“PayPal and AAPA have a long-standing relationship. PayPal is committed to finding a workable solution to combat piracy’s impact on the industry and on their brand. Issues are discussed openly and constructively,” AAPA says.

Visa too comes in for modest praise albeit with slight reservations.

“From our interactions with Visa, we know that they have very stringent internal procedures in place,” AAPA writes. “These procedures can include multiple cease and desist notices and may require proof via a test [IPTV] purchase. All of this takes time while piracy continues unchallenged. Visa is, of course, protecting its rights and interests, and AAPA members are doing the same,” the group says, calling for compromises to find a middle ground.

As for an assessment of Mastercard’s efforts, AAPA says it is “a bit too early to say” with the suggestion that meaningful cooperation has yet to begin in earnest.

In general, AAPA feels that the way forward for all processors is to be more attentive when it comes to due diligence matters, preferably reinforced and monitored by either a third party or a memorandum of understanding. Proactive monitoring to ensure proper compliance with processor terms and conditions is also high on the list of requirements.

Referencing a discussion paper published by the European Union Intellectual Property Office, the AAPA also identifies the need for a more streamlined system whereby rightsholders are able to complain about pirate sites and have their services terminated.

In addition, the rightsholders seek a transparent system that opens up knowledge of how specific “repeat infringers” are being treated by payment processors.

Looking back on Irdeto’s 2018 report, cryptocurrencies accounted for just 4.3% of all payment methods openly advertised by pirate IPTV providers. According to the latest figures, that share has now reached almost 12%. AAPA describes the increase as “not huge” and puts forward various theories of why the uptake is not greater.

“These could be the instability of the cryptocurrencies, sinister association with hacking and ransom demands or that most consumers don’t know how to use crypto,” the group says.

It seems probable, at least among the less tech-savvy IPTV user, that the latter is more likely to be a factor. After all, the most convenient payment methods – PayPal and credit/debit cards – are still the most popular despite an ongoing level of cooperation with rightsholders.

That raises the question of whether clamping down on the simpler forms of payment will have a strong effect on the penetration of pirate IPTV services in the marketplace.

In the short term it seems that the answer is a strong ‘yes’ but over time it is likely that consumers will become more accustomed to using crypto too, making the transition from traditional payment methods a gradual affair rather than a sudden overnight culture shock.

There is also evidence in the market to suggest that IPTV providers are encouraging their customers to move over to crypto sooner rather than later. In part this could be due to payment processor pressure but there is also a desire for providers to secure their businesses by making law enforcement “follow-the-money” investigations considerably harder.

That leaves the prospect of significant action by the mainstream processors eventually forcing a big shift towards crypto and creating even greater problems that will be considerably more difficult to tackle.