During the summer of 2014 LionsGate suffered a major setback when a high quality leak of the then unreleased Expendables 3 film appeared online.

Fearing a massive loss in revenue the movie studio sued the operators of several websites that allegedly failed to remove the infringing files.

Since most of the defendants failed to appear in court, LionsGate asked for a default judgment against the alleged operators of LimeTorrents and the defunct Dotsemper and Swankshare sites.

While the websites are not responsible for the original leak, they failed to respond to a slew of takedown requests sent by the movie studio in the days after the film first appeared online.

The maximum amount in statutory damages is appropriate, according to the Judge, because the movie studio likely suffered substantial losses as a result of the pre-release leak of The Expendables 3.

“In light of the fact that the film garnered over $575 million dollars in worldwide box office revenues, the ‘value of the copyright’ strongly favors a high award of statutory damages,” Judge Wright notes.

“Defendants hosted the anticipated film available online prior to its theatrical release for the purpose of enabling users to illegally download it, which more than likely diminished Plaintiff’s revenue substantially,” he adds. 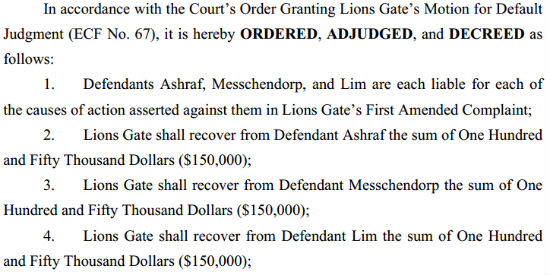 In addition, the maximum in damages may serve as a deterrent for the defendants and any other site operators that link to or host infringing content.

“Moreover, an award of the enhanced statutory damages will likely serve to deter Defendants and others from infringing Plaintiff’s rights in the future,” Judge Wright’s order reads.

The court also issued a permanent injunction on top of the damages, forbidding the men from operating their sites going forward, as well as any other websites through which The Expendables 3 is being made available.

Whether this injunction will be very effective is doubtful. TorrentFreak previously spoke with the LimeTorrents operator, who informed us that his site will remain online, no matter what the outcome is.

“We want to keep the site up and running, and we don’t care about default judgment because we don’t have any faith in the United States,” Ashraf told us.

The site operator, who also runs Torrentdownload.biz, said that the “Expendables 3” keyword was already banned from appearing in the search results, and that he doesn’t intent to pay any damages.

“We already took action and blocked their keyword, so we don’t have a penny to pay them for their own leak problem,” the operator said.

At the time of writing LimeTorrents and Torrentdownload indeed remain operational. LimeTorrent’s .com domain name was locked earlier, but the site is still accessible via a new .cc TLD.

Dotsemper and Swankshare previously shut down. The operators of these sites live outside of the United States and haven’t been responsive, so whether LionsGate will recoup much of the $450,000 is highly doubtful.