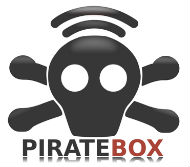 In 2012 and following a breakthrough update, the cost of creating a PirateBox dropped from a very reasonable $100 to an extremely attractive $50. Anonymous offline file-sharing was now within everyone’s reach.

Since then PirateBox has gathered an extremely enthusiastic following, something which has spurred its developers on. Yesterday PirateBox delivered its v1.0 update and a brand new website so to celebrate the occasion TorrentFreak caught up with creator David Darts.

TF: PirateBox was warmly welcomed by the community in 2012. How has community feedback shaped the PirateBox project since?

DD: The community has had a big impact on the development of PirateBox. When I originally released the project, it was essentially just an offline browser-based file sharing system. My first prototype was basically a proof-of-concept – a light-weight python web server running on a hacked Seagate Dockstar network adapter connected to a pocket wireless router.

Almost immediately after publishing the project online, I started receiving feedback from developers and hackers around the world who were interested in using and contributing to the project. My inbox also started filling up with support requests, which is why I set up the PirateBox Discussion Forum.

While I believe in the Free Open Source ethos of providing tech support for my peers (I’ve been the beneficiary of this support many times), I simply couldn’t handle the volume of requests. Fortunately, the community stepped up and helped out with support (and testing, and development) through the discussion forum.

Many of the key features of the PirateBox, like the chat room and UI, have been co-developed by the community. Matthias Strubel, who is now the project’s lead developer, was one of the community members who reached out and joined the PirateBox team. He has really helped push the project forward. 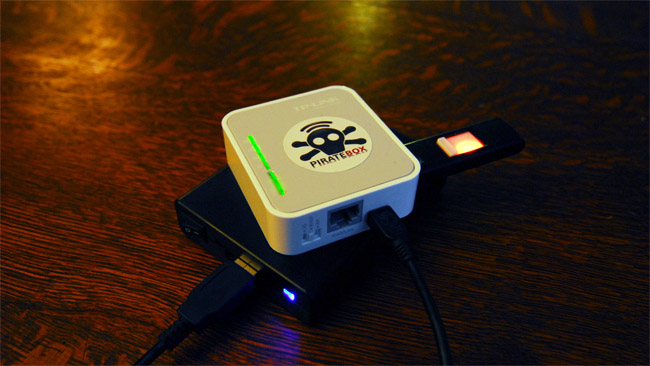 TF: Has PirateBox been used in any unexpected or innovative ways?

DD: As designers know all too well, their creations are often used in ways they didn’t necessarily intend. The PirateBox is no exception.

It has been used by musicians and bands to distribute their music at festivals and gigs, by teachers to distribute and collect digital materials from students, and by emergency response workers and volunteers to distribute local first aid information and community updates. Conference organizers have used it to distribute conference materials and to provide local wireless commenting during presentations, and it’s been utilized by CryptoParty workshop volunteers to securely share cryptographic keys. 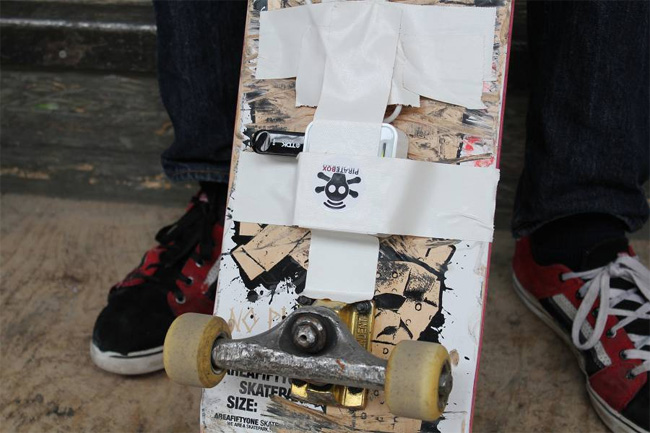 TF: How many users of PirateBox are there today?

DD: Well, we don’t track our users but the project has grown “rhizomatically” across several websites and languages so it’s a little tricky to estimate how many PirateBoxes are out in the wild today.

It is possible, and sometimes preferable, to distribute the PirateBox software locally (and anonymously) using a PirateBox and, because the boxes never go online, it’s impossible to really keep track of them. Generally speaking, this is a good thing.

TF: Technology is always on the move – which developments have most affected today’s PirateBox compared to the one that launched two years ago?

DD: Two big tech trends have helped push PirateBox 1.0 development forward: The proliferation of small screens, which is how we increasingly interact with the network and each other, and the increased availability of tiny, inexpensive computers (including wireless routers, single board systems like the Raspberry Pi and other embedded “Internet of things” devices) which are rapidly filling up our world. 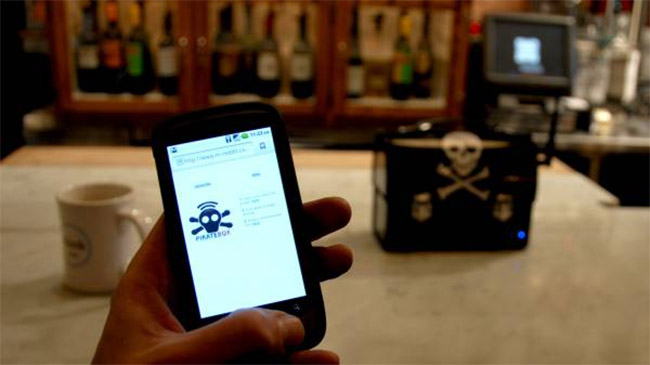 Version 1.0 is thus designed with mobility and low cost hardware in mind. We’ve reworked the UI and based it on Twitter’s Bootstap so that the software plays nicely with small screens. And we’ve built PirateBox 1.0 to run natively on inexpensive hardware.

Another “technology” development that helped increase interest in the PirateBox project was the confirmation through the Snowden leaks last year that the US government was operating near universal mass-surveillance programs around the world, often in partnership or, at least, with the complicit support of several large technology and Internet companies. While this has obviously raised very serious questions and concerns around the world, these revelations have at least helped push important conversations about privacy, surveillance, censorship, freedom, etc. to the forefront. These are all issues that the PirateBox project engages with and thus it has helped inspire new users to join the project. 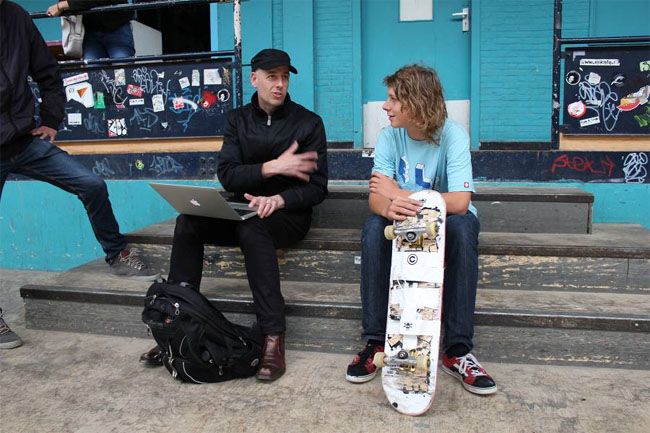 TF: What is so special about the release of PirateBox 1.0, why should existing users upgrade, and what do new users have to look forward to?

DD: Along with the increased stability of PirateBox 1.0, the key new feature is Matthias Strubel’s “box-installer” which radically simplifies the process of building or upgrading a PirateBox. It is now possible to build a new PirateBox in just a few easy steps.

One of my favorite new features of PirateBox 1.0 is the UPnP media server which starts streaming video and audio files over the network as soon as they’ve been uploaded to the box. I’ve actually been using this feature for awhile. It works perfectly as a backend to XBMC for instance and is also a great way of streaming movies to your mobile devices when traveling.

PirateBox 1.0 also offers a image/message bullet board called Kareha by default which is similar to the software used on 4chan. This means that PirateBox 1.0 offers 4chan in a box functionality, which I think is pretty cool. And of course, it also comes with a chat room and browser-based file sharing system.

TF: What role do you see PirateBox fulfilling in the future and what plans do you have for the next 12 months?

DD: The holy grail of offline networking is wireless mesh and we’ve been experimenting with it in the PirateBox. Matthias has been playing with Forban over the last year and we’ve successfully deployed and connected small sets of PirateBoxes using the B.A.T.M.A.N. protocol. This is really just an experimental feature at this point but it is something we’re planning to keep developing.

I’ve also been experimenting with connecting the PirateBox to the Internet, which, in some ways, is counter to the philosophy of the project as an offline file sharing and communications system.

However, I also think there’s real value in providing people with ways to connect online that help preserve their privacy. This is especially important for those who are less tech-savy and thus may not know how to protect themselves from tracking, etc. While the PirateBox will continue to be an offline file sharing and communications system, we may consider providing an optional feature in the future that allows it to be used online. Or this may become a new fork of the project…..

PirateBox Takes File-Sharing Off The Radar and Offline, For Next To Nothing