Pirates Seem Happy to Trust Applinked But Caution May Be Advised

It was later revealed that the shutdown followed legal pressure from the Alliance for Creativity and Entertainment, which objected to the tool’s ability to act as an unofficial marketplace for piracy-focused apps. As always, however, replacements were soon at hand.

The so-called hydra analogy dictates that when one head is cut off, several more appear to replace it and in this case, Applinked, FileSynced and Unlinked were happy to oblige. All three are functionally similar tools (marketing and community approaches aside) but Applinked is perhaps the most interesting for a couple of reasons.

Operating in what Filelinked demonstrated was a controversial niche, it was a surprise to see Applinked offered in the open by a developer who is easily found on the web. In fact, Applinked was initially served from the developer’s own website and is still advertised and linked from there, despite what happened to its predecessor.

Of course, there could be a level of confidence that the same fate does not apply in this instance, perhaps for a number of legal reasons and considerations. Nevertheless, in early October an announcement clearly indicated that change was on the horizon.

On the 21st of October 2021 I will no longer own the rights or any code to applinked…. I will be the senior developer for 6 months after. I have bigger and better things for my followers. Thank you for your support on this project… ? ❤ ? I love you all.

Given the long history of sites and services changing owners for any number of reasons, this didn’t come as a particular surprise. However, new owners aren’t interested in existing projects for no reason so what followed next could be of some interest to users of the software.

This particularly applies to people who are happy to install updates to any software that isn’t open source or is delivered without informative changelogs or indeed any at all.

Those who have monitored the filesizes of Applinked, Filesynced and Uplinked over time will be aware that, give or take, all floated around the 3MB mark. However, the last update of Applinked has now jumped from 3MB to a relatively huge 33MB, without offering any significant additional functionality or features.

It’s important to stress that this in its own right does not show that anything nefarious is at play here but given that a change in ownership reportedly took place just before this update was rolled out, these two developments could be linked, at least potentially.

The developer and new owners (whoever they are) are currently silent on the purpose of that additional 30MB but running the APK through VirusTotal’s scanner shows that Applinked’s previous clean bill of health is now covered in red ink, with at least 16 security vendors advising caution over the software. 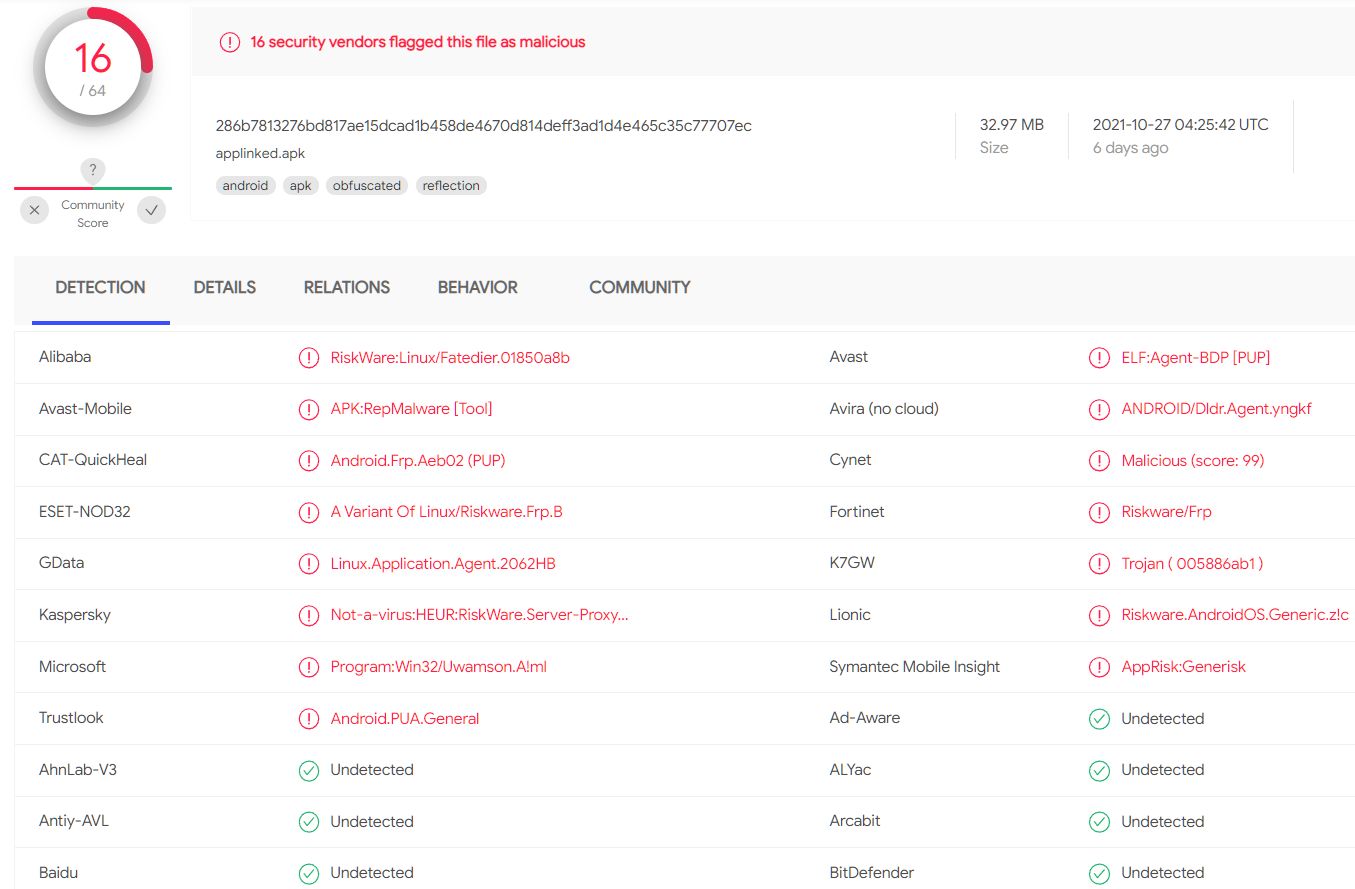 False positives are not unusual in this space but alerts from 16 vendors is a concern and worthy of explanation. That does not appear to be a priority, however.

In an announcement on October 20, the developer of Applinked – who is now not the owner according to previous statements – said that he would be taking a break from social media.

“This does not mean I won’t continue to develop… you will see updates being pushed for all my apps you just may not see the announcements here. the reason for [the] break [and] silence is the idiotic people who think they can command [and] I will obey,” he wrote on Twitter.

Withdrawing from social media due to insulting behavior certainly isn’t a crime and is probably the best response in many circumstances. However, given the change of ownership and the massively increased filesize, the withdrawal may have been a little mistimed. Add in the warnings now attached to the APK and a public statement seems to be needed more than ever.

Whether that explanation will come is yet to be seen but for the masses who have installed the app, assurances that the sudden unexplained bloat and alerts from VirusTotal are not a cause for concern (and why) could put fears to rest.

In the meantime, it’s worth repeating that people who install software purely based on trust are always susceptible to unexpected outcomes. Such outcomes are invariably traded off risk versus reward, but people shouldn’t be surprised when things go wrong.

It’s happened countless times before in the P2P, file-sharing and streaming spaces over the years (even with previously-trusted software) and it will happen again. Maybe this time, maybe not, but people certainly shouldn’t be afraid to ask questions.

Filelinked Was Shut Down By ACE – Can Replacements Avoid The Same Fate?