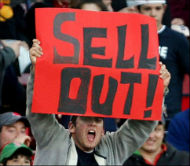 Last year the MPAA and RIAA signed a ‘ground-breaking’ deal with all the major Internet providers in the United States.

In an attempt to deter online piracy, a third-party company will collect the IP-addresses of alleged infringers on BitTorrent and other public file-sharing networks.

The ISPs will then notify these offenders and tell them that their behavior is unacceptable. After six warnings the ISP may then take a variety of repressive measures, which include cutting off the offender’s connection temporarily.

After the initial announcement things went quiet, but that changed last week when the RIAA and the Center for Copyright Information confirmed that all major ISPs will start warning BitTorrent users this summer.

This renewed attention resulted in wide press coverage, and also sparked massive protests. Activist group Demand Progress quickly switched back to SOPA-style campaign mode and launched a petition asking ISPs to cut out of the deal.

“They’re selling us out,” the group writes.

“Just weeks after Internet users from across the globe came together to beat SOPA, the major ISPs are cutting a deal with Big Content to restrict web access for users who are accused of piracy.”

The call didn’t go unheard, and within 24 hours more than 60,000 people signed the petition. Today this number has swelled to more than 90,000 and the end still isn’t in sight.

Earlier this week the Electronic Frontier Foundation (EFF) also expressed its concerns over the so-called ‘graduated response’ system. They highlight that the agreement puts the burden of proof on the alleged file-sharers, which doesn’t seem fair considering the many wrongful accusations that can occur.

“One key problem is the arrangement shifts the burden of proof: rather than accusers proving infringement before the graduated response process starts against a subscriber, the subscriber must disprove the accusation in order to call a halt to it,” EFF writes.

“Worse, accused subscribers have to defend themselves on an uneven playing field. For example, they have only ten days to prepare a defense, and with only six pre-set options available. Of course, there’s no assurance that those who review the cases are neutral, and the plan sorely lacks consequences for an accuser who makes mistaken or fraudulent claims.”

The EFF informed TorrentFreak that they plan to launch an activism campaign in the near future to raise awareness of these issues.

How ‘bad’ the graduated warning system turns out to be largely depends on what punishments Internet providers intend to hand out. Needless to say, a temporary reduction in bandwidth is less severe than cutting people’s Internet access.

At TorrentFreak we are interested in finding out which third-party company will be hired to monitor people’s BitTorrent downloads, and how solid their evidence gathering methods are.

This is important, because the RIAA’s previous partner MediaSentry used rather shoddy techniques which resulted in many false accusations. The RIAA’s current partner DtecNet also has shortcomings as they fail to understand how BitTorrent works.

As we move closer to the July deadline more details should emerge. At the same time the online protests are also expected to increase, both through public initiatives and various advocacy groups. While it’s doubtful that they will ever get the same exposure as the SOPA revolt, there is no doubt that these protests will be noticed.