With millions of visitors per month, Yggtorrent is one of the largest torrent sites on the Internet.

Catering to a French audience, it’s not widely known everywhere, but in France, it’s getting close to a spot among the 100 most visited sites in the country.

Yggtorrent is not the typical torrent indexer. It sees itself as a community instead and has a dedicated tracker, something that’s quite rare these days. The site is really only a few months old and filled the gap T411 left behind when it closed last year.

In a letter sent on behalf of SACEM, BrandAnalytic pointed out that the torrent site is offering copyrighted content without permission from the owners, thereby violating the law.

“This contravening domain name provides users with copyright-protected works without any express or tacit permission of the societies or their authors, composers and publishers,” the complaint reads. 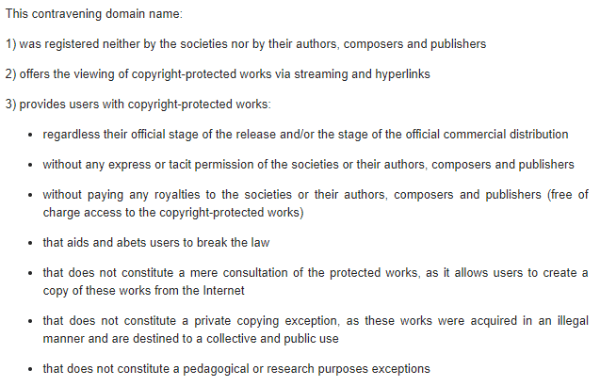 Strangely enough, the letter also accuses the site of phishing. As evidence, BrandAnalytic sent a screenshot of the site’s registration page while mentioning that it automatically installs cookies on users’ computers.

Since Yggtorrent uses a Whois privacy service, BrandAnalytic says it can’t identify the owners. They, therefore, ask Internet.bs to step in and take the domain offline.

“As you are the Registrar of this contravening domain name, we count on your prompt and amicable collaboration to remove it from the global domain tree,” BrandAnalytic writes.

The complaint was sent late February and Internet.bs forwarded it to the torrent site at the time, so it could respond appropriately. However, Yggtorrent did not respond at all.

After a reminder, the registrar decided to put the torrent site’s .com domain name on hold a few days ago, which means that it became inaccessible.

TorrentFreak spoke to an operator of Yggtorrent who explains that the site receives thousands of DMCA complaints and that it’s impossible to answer them all. They’ll now leave the .com domain domain behind and move to a new one, Yggtorrent.is.

Instead of using Internet.bs as registrar, the new domain name was purchased through Njalla, the privacy-oriented domain registration service that was founded by former Pirate Bay spokesperson Peter Sunde.

“Now, we know that we should not use internet.bs anymore. This is not the first time they suspend a domain name like this. It happened to Extratorrent in the past.

While the site is indeed back online, older torrents may not function as usual, as the tracker of the .com domain is no longer accessible. The site, therefore, recommends users to update the tracker address manually got get them going again.

Yggtorrent, which came under new management recently, appears to come out of this issue relatively unscathed. However, being in the crosshairs of SACEM is not without risk. The organization previously took out What.cd and Zone-Telechargement, among others. 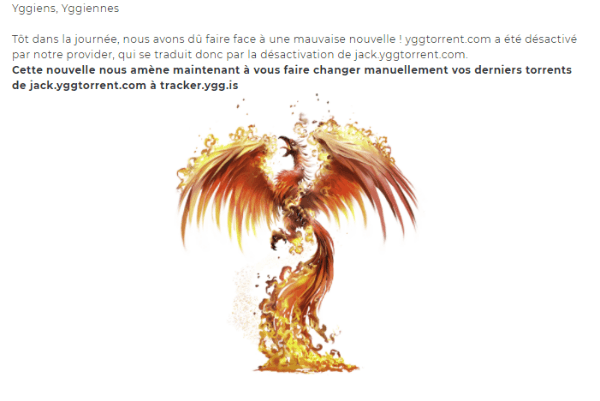