Many of these tube sites became big by offering access to a wide variety of content, some of it posted without permission. However, that doesn’t mean that Mindgeek is turning a blind eye to pirates. On the contrary.

Earlier this month, Pornhub’s transparency report revealed that the site removed 544,021 pieces of content following DMCA takedown requests. In addition, the site’s automatic upload filter blocked more than 100,000 videos before they were published.

Unfortunately, PornHub’s transparency report didn’t mention how many DMCA notices the company sends each year. To find out more, we reached out to the site, whose copyright issues are handled centrally by Mindgeek.

After first speaking with Mindgeek’s Anti-Piracy Strategy Manager, our questions were forwarded to the PR department, which was willing to share some details, but not too many.

“MindGeek sent notices for 4.5 million infringing URLs over the past 12 months,” a Mindgeek spokesperson informed us.

We requested a more detailed breakdown, but Mindgeek said it couldn’t provide that. Also, it is worth noting that the 4.5 million URLs only reference sites that host or display infringing content directly.

Mindgeek didn’t include the takedown notices that are sent to search engines, which are much higher in number.

Mindgeek Sends Over a Million Takedowns to Google Every Week

Looking at Google’s transparency report we see that last month alone, Mindgeek asked the search engine to remove eight million allegedly infringing links. This adds up to hundreds of millions of URLs over the past several years, making Mindgeek one of the top takedown senders. 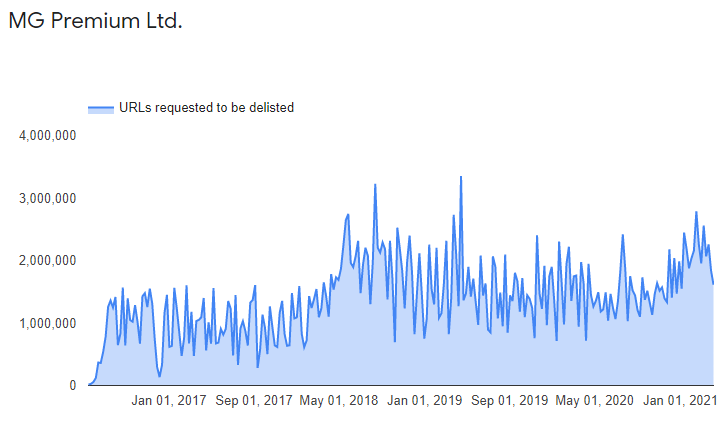 “We use industry-leading tools both internally and via external vendors including digital fingerprinting technologies to ensure accurate and valid identification of our protected content at scale,” Mindgeek’s spokesperson told us.

In fact, the company has developed its own “SafeGuard” fingerprinting tool, which it will make freely available to other sites in the future. Perhaps that can ultimately help to lower the number of takedown notices the company has to send.