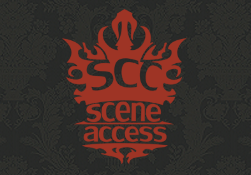 SceneAccess (SCC) has been a respected and well-connected private BitTorrent tracker for more than a decade, but a few hours ago it closed its doors.

The operators of the tracker, which recently stopped enforcing a mandatory share ratio, had been complaining about a lack of financial support for a while.

“As we stand now, we have NO money left to pay our bills and the lights WILL go out,” one of the staffers wrote earlier this year, urging the site’s members to chip in to help the site stay online.

Apparently, these frequent donation reminders were unsuccessful. Today, members of the tracker, some of which have been with the site for more than tens years, are greeted by a farewell notice.

“After putting a decade of blood, sweat and tears – it is time to throw in the towel. It is time for us to close this chapter…” it reads, thanking all donors who helped the site over the years.

“As times change, so do peoples priorities and without continued economical support from the community, it is impossible to run a site of this size. It’s been a pleasure for all of us to serve you with pride and honor.” 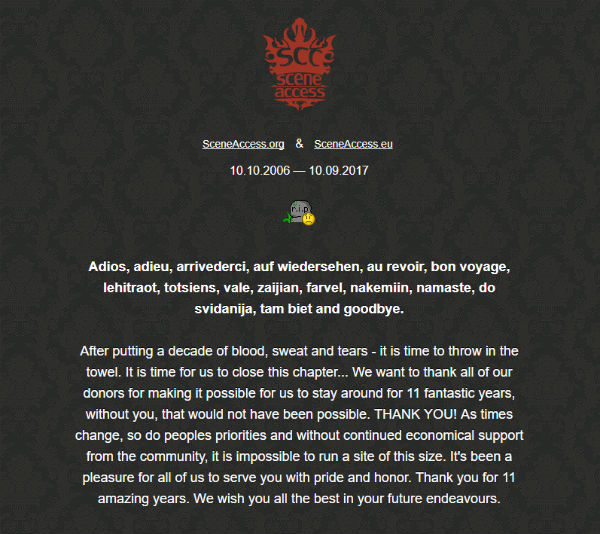 SceneAccess has seen its fair share of trouble over the years. The site was raided in its early days, forced by anti-piracy group BREIN to switch hosts, DDoSed on several occasions, and suffered a leak of user data, among other things.

While it recovered from all these events, a lack of financial support now means that the end has finally come.

The tracker is not the only site to run low on donations. Many trackers, including several of the big players, have complained about the same issue in recent years.

While there may always be additional factors in play when a site shuts down, it is clear that SceneAccess is not coming back, unless there is some magical turnaround. This means that its users have to find a new home, wherever that may be.

“Thank you for 11 amazing years. We wish you all the best in your future endeavors,” SCC concludes.

Another one bites the dust…

SceneAccess and NFOrce Under Pressure from BREIN