BitTorrent trackers are no strangers to DDoS attacks. Pretty much all sites of a respectable size are targeted on occasion by unknown sources. Today is one such day, but this time the source appears to be rather public.

A person using the nickname Zeiko is claiming responsibility for the DDoS action, which was initially intended to force What.cd staff into giving out an invite.

Zeiko joined IRC (Internet Relay Chat) to convince site staff that he already had an account, but when the admins couldn’t find any record of it in the database Zeiko turned his anger on the site.

“What.cd is now being under DDoS attack until I get my invite,” he wrote in What.cd’s IRC channel. 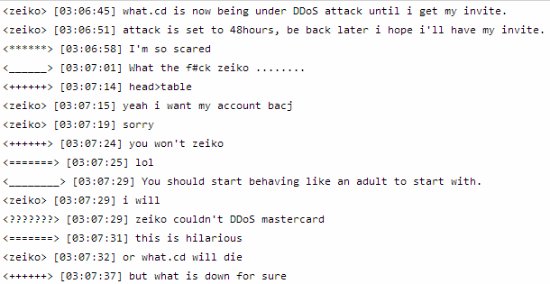 While these kinds of threats are not uncommon, this one proved to be serious when What.cd became unreachable.

Later the same user started a Twitter account using the handle “Zeiko Anonymous” announcing the “Piracy DDoSes” with What.cd as the first target.

But it didn’t stop there. After a few hours Zeiko was looking to inflict more damage, asking whether PassThePopcorn.me (PTP) or Broadcasthe.net (BTN) should be next.

The disgruntled user settled for the latter and announced BTN as Piracy DDoS Project #2. The TV-tracker has been in maintenance mode ever since.

During the day four more attacks were launched against IPTorrents, HDBits, The Vault and SceneAccess.

At the time of writing What.cd, BroadcastTheNet and SceneAccess remain inaccessible. The other sites can be reached but were offline earlier today.

From the looks of it Zeiko (who now hates torrents) is indeed responsible for the downtime at these popular private BitTorrent trackers, but thus far we haven’t been able to get this confirmed by any of the site staff.

One thing’s for certain though, torrent invites are serious business.

Update: The BTN site and tracker are back.